Batman's world is getting turned upside down inWhite Knight, but the former Joker isn't the only one responsible for his pain.

Spoilers incoming for Batman: White Knight #3, so if you haven't read the issue yet you've been warned.

Jack Napier isn't under the Joker's influence these days and wants to reveal that the true villain of Gotham is Batman. Napier and Harley use one of Mad Hatter's control headband's to drive a variety of Gotham villains to team-up and start rioting in the streets. Batman leads them to the site of Backport's new library, but it is destroyed in a huge explosion that puts Batman under rubble.

He is Batman, after all, so he survives, but he is in awful shape and bleeding everywhere. He then directs the Batmobile to take him to the Batcave, and once he arrives he starts mending his wounds. He then takes a second to look at Alfred, who is hooked up to medical equipment and an IV on a hospital bed. He touches his hand but then starts to black out and falls to the floor. It's here that Alfred stirs and wakes, seeing Bruce hit the floor.

Later Bruce wakes up but is not in his costume any longer. He's in the hospital bed, with an IV in his arm. He looks over and sees Alfred in the chair beside him, though the man who raised him is no longer here. He sacrificed himself to save Bruce, but before he died he left a note for Bruce on the table next to him. 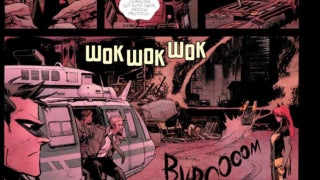 The scene transitions to a funeral, where pictures of Alfred's early days in the military are next to ones where he stands alongside Bruce. From his youth to his graduation and into his crime fighting career, Alfred was always there, and the Bat-Family will never be the same.

The contents of that letter aren't revealed in the issue, though hopefully sooner or later we find out what it said.

You can find the spoiler images in the gallery, but make sure to read the full issue for yourself as well, as it's more than worth it.

The Batman Family Loses An Ally In White Knight