Superman and Batman have always had a friendly rivalry, and as a result, fans now know the answer to a long-held question.

Spoilers incoming for Batman #37, so if you haven't read the issue yet you've been warned.

What is that question you ask? Oh, well, it would be the question of whether Batman can hit a pitch thrown by the superhuman Superman, and Tom King, Clay Mann, and Jordie Bellaire manage to give a definitive answer. That would be a resounding yes because you should never tell Batman there's something he can't do. 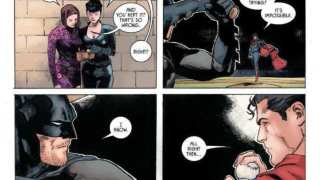 It all starts when Clark and Lois get together with Bruce and new fiance Selina Kyle at the Gotham County Fair. As they enjoy each other's company (in each other's costumes to boot), Bruce and Clark manage to find a batting cage. The two heroes hit a few baseballs just for fun, but after the pitching machine is a bit slow for them, Clark brings up the idea of pitching directly to Bruce.

That idea continues to come up all throughout the issue, and eventually, after a few more county fair antics the duo decided to settle the debate once and for all. They switch back into their normal costumes and take to the field, with Batman attempting to hit a ball pitched by a person capable of throwing things at indescribable speeds.

Clark even reminds Bruce just what he's trying to achieve, saying "You know, what you're trying? It's impossible." Bruce responds as anyone would expect him to, responding simply "I know". With that Clark says "All right then...here's to the impossible!" and hurls the ball forward.

The final page gives fans the answer they wanted with a "crack" of the bat Batman sends the ball sailing high into the air as the final credits are displayed. It just goes to show you never tell Batman something's impossible. Instead, you would just say it isn't possible...yet.

You can find the spoiler images in the gallery.

The excellent Batman #37 is written by Tom King with art by Clay Mann and is available in comic shops now.

DC Reveals If Batman Can Hit A Baseball Pitch From Superman