DC has provided ComicBook.com with an exclusive first look at the solicitations for Brian Michael Bendis's Action Comics #1,001 and Superman #1, the regular issues scheduled for release following the events of Bendis's status quo-setting miniseries The Man of Steel.

Right away, fans can tell that The Man of Steel will be doing some crazy things, as the first story arc in Superman appears to deal with a global status quo shift that Superman is trying to fix. It may be interesting to see whether a change that significant will be reflected in other DC Comics, or limited to the Superman titles.

Bendis comes to DC after years of being one of Marvel's most consistent hit-makers and creating a legacy there that includes creating Miles Morales and Jessica Jones. His first DC book will be released next week, as he is one of the contributors to the oversized, anthology-style Action Comics #1000.

Following Action Comics #1000, current Action and Superman writers Dan Jurgens, Peter J. Tomasi and Patrick Gleason will exit the titles to make way for Bendis (though Gleason will head to Action Comics as its artist) -- but first, Bendis will launch a six-issue, weekly series titled The Man of Steel, mirroring the approach John Byrne took with the character.

After The Man of Steel, Byrne took over the Superman titles as well, launching a new Superman #1 in 1986. At the time, it was a bold and surprising move, but it set a standard for a changing industry: Bendis's Superman #1 is the third such relaunch since 2011. 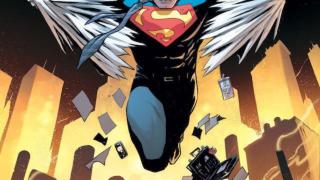 You can check out the official solicitation text below, and the covers in the attached image gallery.

SUPERMAN #1
written by BRIAN MICHAEL BENDIS
art and cover by IVAN REIS and JOE PRADO
variant cover by ADAM HUGHES
variant cover by DAVID MACK
A bold new chapter for the greatest superhero of all time begins here as the superstar team of writer Brian Michael Bendis and artist Ivan Reis begin their run on the all-new SUPERMAN! The fallout from the Man of Steel miniseries has Clark Kent looking at the world through new eyes...with new ideas about what Superman could and should do for the city of Metropolis and the planet Earth. His first job? Getting the planet back out of the Phantom Zone!
ON SALE 07.11.18
$3.99 US | 32 PAGES
FC | RATED T

ACTION COMICS #1,001
written by BRIAN MICHAEL BENDIS
art and cover by PATRICK GLEASON
variant cover by FRANCIS MANAPUL
variant cover by DAVID MACK
Acclaimed writer Brian Michael Bendis' new chapter for the Man of Steel and the world of tomorrow begins here! The devastating repercussions from the Man of Steel miniseries still reverberate as Metropolis enters a new age! The Daily Planet teeters on the brink of disaster! A new criminal element has made its way onto the streets of Superman's hometown! The longest- running superhero comic of all time explodes off the page with art by fan favorite Patrick Gleason.
ON SALE 07.25.18
$3.99 US | 32 PAGES
FC | RATED T

There are a few quick things to unpack here, of course:

Superman #1 will see Clark attempting to extricate Earth itself from the Phantom Zone. This, one assumes, is a significant spoiler from The Man of Steel, but also an interesting story decision given Superman's recent decision to declare the Zone closed for business.

In Action Comics #999, Superman freed Hank Henshaw from the Phantom Zone, explaining that he felt it was cruel and unusual punishment, and that he planned to try to find an alternative means of punishment for the worst of the worst. It seemed like a bold statement by Jurgens, but one that veered so far from the established lore that it may be ignored by future creators.

Instead, one must now wonder whether Jurgens was asked to establish a new status quo for the Phantom Zone and merely took advantage of the opportunity to tell the story he did with Henshaw.

A "new criminal element' on the "streets of Superman's hometown" is also an interesting teaser. One must wonder whether it will be a human or metahuman threat, and whether it will be entirely new or a reimagined take on Intergang.

Intergang, an organized crime group with metahuman footsoldiers, was created in 1970 by Jack Kirby and has reappeared periodically in the Superman titles since. It played a major role in the post-Crisis on Infinite Earths Superman titles immediately following Byrne's The Man of Steel, and their prominence in those comics carried over to Lois & Clark: The New Adventures of Superman, a TV series that ran from 1993 to 1997. It most recently appeared in the comics during Superman: Lois & Clark, a miniseries that set up the post-Rebirth Superman status quo.

While it could easily be that Bendis is creating an entirely new group of villains or organized crime group to challenge Superman in his new series, the likelihood that it will be either Intergang or an Intergang-like group seems high given the group's ties to Daily Planet-centric stories, which is somehing Bendis has promised in Action Comics.

A new age for Superman launches on July 11 with the release of Superman #1 from Brian Michael Bendis, Ivan Reis, and Joe Prado.