DC has provided ComicBook.com with an exclusive first look at next week's Detective Comics #984 from writer Bryan Edward Hill and featuring art by Miguel Mendonça.

Black Lightning, who had not been a major character in the DC Universe since it was rebooted in 2011, has recently enjoyed a revival. With a popular TV show on the air, the character's co-creator Tony Isabella has been writing Black Lightning: Cold Dead Hands.

It wasn't long ago that current Detective Comics writer James Tynion IV confirmed that he would be leaving the series. Tynion -- who also continues to publish creator-owned work -- is working on Justice League Dark, which spins out of the events of the Justice League: No Justice series he co-wrote with Scott Snyder and Joshua Williamson. 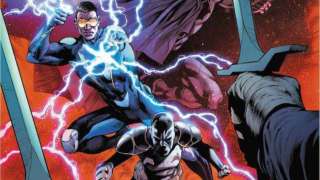 Hill's run will last five issues. There is no word who will take over after he leaves, or what Hill's next project will be, although deductive reasoning suggests a likely revival of The Outsiders.

Hill is no stranger to reinventing DC properties; as writer of The Wild Storm: Michael Cray, he has introduced deranged, evil, or otherwise Wildstorm-ized versions of DC superheroes.

You can see the official solicitation text for Detective Comics #984 below. The preview pages are in the attached image gallery.

"On The Outside" part two! Batman wanted Black Lightning involved in the lives of his protégés—but how involved was the Dark Knight thinking? What kind of missions will Jefferson Pierce take them on? And what, exactly, is he whispering in their ears about Batman himself?