DC has provided ComicBook.com with an exclusive preview of Detective Comics #981, the final issue in James Tynion IV's two-year run on the series which began with Rebirth.

“Going back to the classic numbering with my name on it meant the world to me, and I couldn’t be happier,” Tynion told ComicBook.com at the time.

The relaunch teamed Batman with a group of younger, Gotham-basd heroes, many of whom had been largely out of circulation since DC's 2011 "The New 52" reboot. Those fan-favorite characters found new life and new purpose in Tynion's Gotham.

“As a fan, there are characters I love more than any other characters,” Tynion said. “I think every comic book fan has those characters that have mattered since they started reading, and for me it is that next generation of Batman characters: it is Tim Drake, it is Stephanie Brown, it is Cassandra Cain. And in putting a book together, you always want to be writing the book that you want to read more than anything else in the world.” 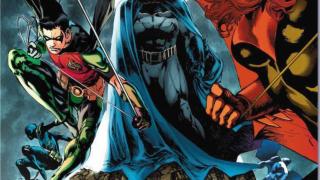 The characters -- particularly Cass and Steph -- had come to Gotham through the Batman Eternal and Batman and Robin Eternal weekly event series, both of which Tynion had a hand in. The latter also focused heavily on reintegrating Tim Drake into Gotham; he had largely been defined by his relationship with the Teen Titans following the reboot.

“As we were engraining them back into Gotham, we didn’t really get to see them in action in Gotham,” Tynion said. “I’m thrilled that I get to be the one who drives their stories forward. I’m thrilled that I get to write the stories that will drive these characters into the next five, ten years and beyond. I wanted to create a real home for them, and Detective Comics feels like the perfect home for them.”

You can check out the pages in the attached gallery, and the official solicitation text below.

“Batmen Eternal” finale! This is it—the unbelievable conclusion of James Tynion IV’s Batman epic! It’s the last stand of the Gotham Knights, fighting a monster they helped inspire...and a destiny they won’t accept! What will become of the greatest crime-fighting team Gotham City ever saw?

Detective Comics #981 will be available in stores and online Wednesday.