DC has provided ComicBook.com with an exclusive preview of The Flash #49, on sale Wednesday from writer Joshua Williamson and featuring art by Howard Porter.

The issue, part three of the long-awaited "Flash War" storyline, sees Wally West desperate to put his life back together -- even if he has to break the Speed Force to do it.

"I grew up with Wally, Wally was my Flash, and Barry was always remembered in flashbacks," Williamson recently told ComicBook.com. "He was remembered a certain specific way, you never speak ill of the dead, so Barry was always propped up as the perfect hero, he was the one who sacrificed himself to save the Multiverse. He's perfection. So throughout Wally's run, I think he was written a certain way whenever they do flashbacks, and then that eventually bled out into how he was written in books that weren't flashbacks. You look at Brave and the Bold or JLA Year One, both by Mark Waid, the way that Flash was written those stories, he was written the way Wally remembered him. But if you go back and you read all those older stories with Barry, you find that he was a flawed character, he was someone who had these challenges and made mistakes and bad choices, and sometimes would let certain things slide and would be obsessed with certain things."

It was Geoff Johns's groundbreaking run on The Flash that gave Williamson the affection for Barry taht would ultimately allow him to write his own fan-favorite years on The Flash. 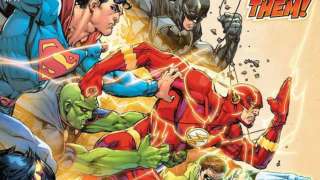 "Geoff was able to find a way to tap into the flaws that Barry had," Williamson continued. "You look at the stuff he did during Rebirth, and you look at the stuff during Brightest Day, and you can tell that Geoff was starting to tap into those, showing you that Barry was not perfect which was a lesson that Wally had to learn too. I feel like it was important to me that both characters were presented in a way that fans would be happy with both interpretations of these characters, and understand this conflict, but in a way where you were invested in the story and super invested in these characters to where you would not feel alienated. If you're a really big Wally fan going into the story, you're gonna get what you want from a Wally story. If you're going into the story and you're a Barry fan, you're gonna get what you want from it from a Barry story. "

You can see the preview pages in the attached gallery, and the official solicitation text below.

"FLASH WAR" part three! There's only one thing that can put Wally West's life back together. As he races back to the present, he has one goal: break the Speed Force! Can The Flash stop his former sidekick before it's too late?