DC has provided ComicBook.com with an exclusive preview of Wonder Woman: Come Back to Me #3, which will be out this week from the publisher. The issue will collect stories originally published in the Walmart-exclusive Justice League Giant #7 and Wonder Woman Giant #1, from the creative team of Amanda Conner and Jimmy Palmiotti. Like the similarly-themed Superman: Up in the Sky and Batman Universe comics, which collect Tom King's Superman and Brian Michael Bendis's Batman, respectively, the comic typically features two shorter stories which are generally, but not always, direct continuations of the chapter before. The Wonder Woman stories began in Justice League Giant, as part of the initial Walmart-exclusive project, but soon, the Amazing Amazon had her own title, along with other characters whose books came in later "waves" of launches.

Palmiotti and Conner, a husband-and-wife team of writer/artists, have been some of the most prolific and best-selling creators at DC in recent years, helping to build Harley Quinn into one of the most popular and well-reviewed titles in the publisher's stable. The art on this issue is from Tom Derenick and Trevor Scott. 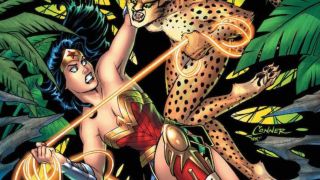 Wonder Woman: Come Back to Me #3 Gallery

You can check out preview images in the attached gallery, and the official synopsis for the issue below.

Available to comics shops for the first time! Trapped on a mysterious island, Wonder Woman must overcome injury and her own waning powers if she's going to keep her friends alive! And an attack by Cheetah leads the group to a mysterious landing site. Originally published in JUSTICE LEAGUE GIANT #7 and WONDER WOMAN GIANT #1!

Wonder Woman: Come Back to Me #3 will be on sale on Wednesday, September 18 at your local comic shop and digitally via ComiXology.

Exclusive DC Preview: Wonder Woman: Come Back to Me #3