2017 will expand the DC Extended Universe in a big way, with both Wonder Woman and Justice League hitting theaters. As such, there's been a rapid expansion of the supporting characters that will populate the various corners of the DCEU, with names like Willem Dafoe, Amber Heard, J.K. Simmons and Chris Pine having all joined the DC Films Universe.

Last fall there was another famous face that fans spotted hovering around the outskirts of the DCEU: Monty Python funnyman John Cleese. Cleese was seen becoming social media buddies with some key creative people in the DCEU (like Zack Snyder and Ben Affleck), lending strong credit to the theory that he will be playing a character in an upcoming films - most likely starting with Justice League.

Getting into character before tonight's Q&A in Worcester, MA pic.twitter.com/ajek3bpyQS


A few days ago, Cleese sent the following tweet to fans before speaking panel event he was doing, and as always, eagle-eyed DC fans were ready to pounce.

The comics on the desk would be:

It's hard to put together from that eclectic lineup who Cleese is playing in the DCEU, but it seems increasingly likely that his character will be introduced in Justice League, but will likely be part of the Batman side of the sandbox. Given the rumors we've heard, it wouldn't be surprising to see Cleese playing a doctor or warden of Arkham Asylum (though seeing him as an inmate would be great too...).

Arkham shows up in both Dark Knight Returns and The Black Mirror - and in both stories, the sequences involve The Joker escaping or being released from the facility. Could Cleese be some version of Arkham's new-age shrink, Dr. Bartholomew Wolper, from Dark Knight Returns? It would be a great casting fit... 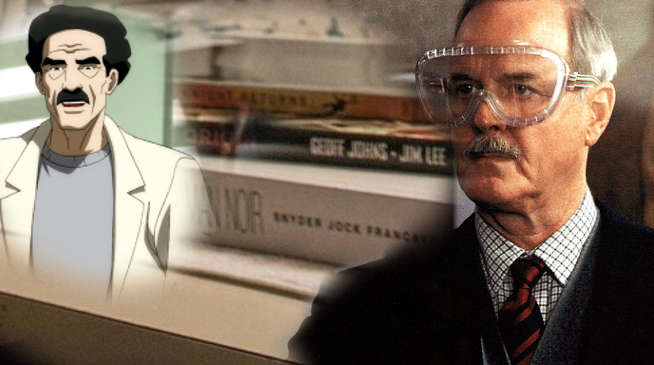 There's already been rumor that Justice League includes a stop at Arkham Asylum; since Snyder's DC superhero team up is based (in part) on the Justice League: Origin storyline, it would make sense that Cleese would be reading up on that, too, if he's set to make an appearance.

Does this seal it: Is John Cleese in the DCEU? And who do you think he's playing?

The Suicide Squad: 11 Secrets We Learned On Explosive Set