DC has provided ComicBook.com with an exclusive preview of next week's Wonder Woman #40 from writer James Robinson and the art team of Carmen Carnero, Emanuela Lupacchino, Ray McCarthy, and Romulo Fajardo, Jr.

You can see the pages in the attached image gallery.

The issue will bring the "Swan's Song" story to a finale, pitting Wonder Woman against Silver Swan -- but maybe not in the way you might think when we say that sentence about a superhero comic. Falling back on Diana's role as an ambassador of Peace, she is not trying to merely beat Swan into submission but to help her.

Wonder Woman was prominently featured in Batman this week, ahead of the pair launching a new, shared title, The Brave and the Bold: Batman/Wonder Woman. That title will feature the art of fan-favorite Wonder Woman artist Liam Sharp, who will also write it.

Sharp, along with writer Greg Rucka, left the series about a year ago, and after a brief fill-in arc, Robinson took over. With numerous DC Rebirth titles ending, getting new creative teams, or configurations in upcoming months it is not yet clear whether Robinson will remain on Wonder Woman long-term or whether the book will get a new writer soon. 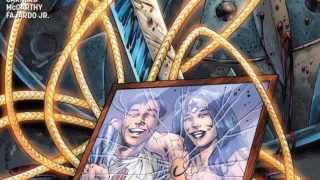 Meanwhile, this issue features a subplot featuring Steve Trevor, Wonder Woman's on-again, off-again boyfriend whose relationship with the Amazing Amazon was perceived as threatened by some fans, sensing the potential for Wonder Woman and Batman to have sexual chemistry in their upcoming series together.

Sharp dismissed that idea outright, saying that some criticism of the as-yet-unreleased comic "is from people who wrongly think I’m splitting up Diana and Steve – I’m not. I wouldn’t."

You can check out the official synopsis for Wonder Woman #40 below.

“SWAN’S SONG” finale! Wonder Woman fights to break Silver Swan out of her mania and stop her all-out assault. Will Wonder Woman be able to get through, or will she lose her friend to the madness in the process?

Wonder Woman #40 is on sale next Wednesday, February 14, at your local comic shop and on ComiXology. You can pre-order a digital copy today.

Black Lightning Recap: Here's Everything You Missed in "The Book of Reunification: Chapter Two: Trial and Errors"