The end of an era is upon us, as the promotional campaign for the final Sharknado movie has begun.

Syfy's franchise of so-bad-it's-good TV movies is set to come to a close next month, with the release of The Last Sharknado: It's About Time. To celebrate the occasion, the network recently released a slew of posters , which highlight franchise stars Fin (Ian Ziering), April (Tara Reid), Nova (Cassie Scerbo), and Skye (Vivica A. Fox). You can check out the pun-filled posters (via TVLine) in our gallery below. 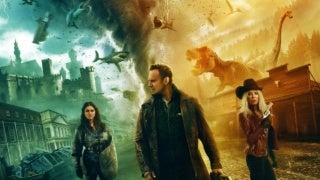 The Last Sharknado: It's About Time Posters Gallery

As fans will remember, the previous Sharknado installment left the Earth completely decimated, as Finn was sent to the future with a grown-up version of his son Gil (Dolph Lundgren). As that plot point hinted, this final chapter will be a time-traveling affair, as Finn is required to travel back in time and stop the first Sharknado from ever happening.

Judging by these posters, that adventure will take Sharknado's ensemble everywhere from the Old West and the Middle Ages to the age of the dinosaurs. And apparently, those different time periods could ultimately leave some fans scratching their heads -- for a good reason.

You can view the official synopsis for The Last Sharknado: It's About Time below.

"Our hero Fin (Ian Ziering) has battled sharks all over the globe, but in this last installment he will tackle the final shark-tier — time travel. In the ending moments of SHARKNADO 5: GLOBAL SWARMING, Fin was seen wandering alone on Earth after it was destroyed. Now he must travel back in time to stop the Sharknado that started it all. Will Fin and the gang be able to set everything right and save the world once and for all? A production of The Asylum, SHARKNADO 6 is directed by Anthony C. Ferrante, based on an original screenplay by Scotty Mullen."

Are you excited to see the final Sharknado? Let us know what you think in the comments below.

The Last Sharknado: It's About Time will debut on Sunday, August 19th, at 8/7c on Syfy.

'The Last Sharknado: It's About Time' Movie Posters Released

The Wretched Review: This Monster Movie Finds Life With Twists and Turns

Murder in the Woods: An Unseen Threat Lurks in the Darkness in New Clip (Exclusive)