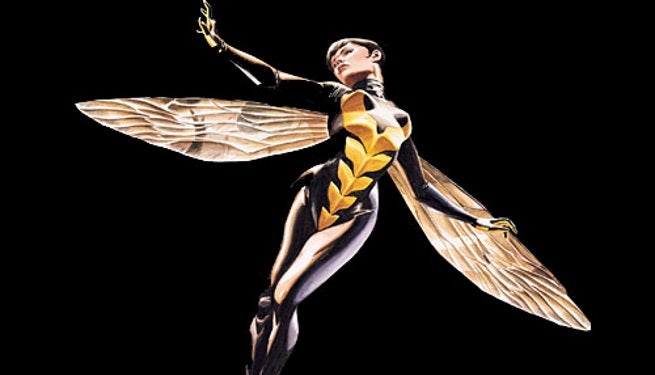 It was recently confirmed that Hayley Atwell would play Agent Peggy Carter in a flashback scene in the upcoming Marvel Studios film Ant-Man. HitFix believes this revelation may offer a clue as to what role the Wasp might play in the Marvel Cinematic Universe.

Janet Van Dyne – the Wasp, founding member of the Avengers, and Hank Pym's wife – has been conspicuously uncast in the Ant-Man film, though her and Pym's daughter, Hope Van Dyne, will be played by Evangeline Lily. Michael Douglas, who plays Pym, said at San Diego Comic-Con that "unfortunately during this process [of becoming Ant-Man], a tragic personal accident happened with [Pym's] wife [and] daughter."

The recent confirmation of the flashback scene with Agent Carter - which supposedly shows a conversation between her, Howard Stark, and Pym – has led HitFix to assume that Janet is an agent of S.H.I.E.L.D. during the organization's earliest days. This association would put her into contact with Pym, which leads to them falling in love, getting married, giving birth to Hope, and her involvement with Pym's Ant-Man research.

And…sure, why not? There's no reason this couldn't be the case, but there's definitely a leap being made. Though Ant-Man is already filming, there's still been no casting announcement for Janet at all, so it's possible that she simply isn't in the film. Even if she is, there's no direct evidence to suggest that she's an agent of S.H.I.E.L.D. beyond the fact that S.H.I.E.L.D. will pop up in a flashback scene. There's no reason not to assume that, if she is in the film, she's already working with, or even married to, Pym in the flashback.

This theory also neglects the possibility that making Janet an Agent of S.H.I.E.L.D. might be a disservice to her character, which is partially defined by her willingness to live in the world. Her "normal life" as a high end fashion designer creates an important distinction when compared to her husband and teammates, who get entirely absorbed in their work, be it heroics or science.

The theory seems built largely on the wishful thinking of Wasp fans, who insist that she's simply too important to the Marvel Universe to not be included in the film universe. It would be nice to think that Janet was tied to the early era of S.H.I.E.L.D., because that would open up the possibility for her to play a role in Agent Carter, to get some kind of indirect claim to being a founding member of one of Marvel's key organizations, and possibly even return in full superhero form if the "accident" Douglas mentions ends up being less fatal than most have assumed.

However, as nice as this all sounds, it's still built on a lot of assumptions and not a lot of actual information, and we still can't get around the fact that Janet hasn't officially been cast in the film. Again, there's no reason why this couldn't, in theory, be true, and it would be a pretty fun way to introduce the character if it is, but we'll need a little more to go on before we push past hoping and start believing.