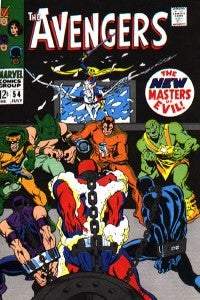 Here's one of those rumors that's been in the water for a while now, but there wasn't anything really much to back it up. Now, we seem to have got some kind of weird hint from a source that may or may not be a Marvel insider but is probably just some kid messing around with his parents' Twitter account. In any case, it's out there now and worth mentioning: Internet rumor has it that the Masters of Evil will appear in Avengers 2. This rumor seems to be strengthened by the fact that it ties into other unsubstantiated-but-persistent rumors that Baron Zemo will appear in Captain America: The Winter Soldier. Zemo, after all, has been involved with many of the iterations of the team over the years. Radioactive Man, whose civilian identity will appear in Iron Man 3, was also a member at times. Coming from the same Twitter account that started all the "Doctor Strange in Thor: The Dark World" rumors came a cryptic tweet the other day, telling followers: "The numbers will lead you....9876541." Those numbers didn't mean anything to anyone right away, but rather than ignore it, someone brought it to the Marvel Cinematic Universe subreddit, where fans pored over the information and tried to make some sense of it. One of the redditors, following the clue master on Twitter, then told the rest of the group what he saw (edited here for apparent relevance):

"Well he replied to a guy saying to "unscramble them", so the seven-digit sequence of 9876541 must mean something in some way of organization. Of course, this means there are 5040 combinations of ordering to choose from, so my question would be if anybody knows of any seven-digit sequence of number which would be of significance to any of the characters that are rumored to be in upcoming films? "He replied to somebody saying 4 of the numbers are a year, so that definitely means the 1 and 9 are the beginning of the year (unless it's a distant future or past date, which we can rule out for now out of my laziness), meaning the number is right now xxx19xx with 87654 left over. So this number is definitely a date of some sort, with 120 different combinations now."

This brought forth the solution, "Avengers Issue 54, released July 1968. 54 7/1968," which is the first appearance of one of the incarnations of The Masters of Evil. Some fans have speculated (or at least fantasized) that the team of villains might appear, acting as a kind of foil to the Avengers to create a large-scale super-brawl in the third act of the film while the villains' master plan, presumably helmed by Thanos, takes the story to critical mass. It's hard to guess whether this source has any real credibility, although fans and the entertainment press seem to be treating him like he does. Even if he's got some knowledge of what's going on, it's hard to know whether or not his codes are being decrypted correctly. It's worth reporting a rumor that's beginning to gain some steam, especially one that ties into another rumor and seems to make sense of both of them...but the whole thing stinks of that time a few years ago when a Newsarama message board poster going by the handle "Booster Gold" seemed to be implying (without ever actually saying) that he was Geoff Johns. The poster implied that his cryptic message board posts could be interpreted as clues to future events, not unlike the "chalkboard clues" in 52 and Booster Gold. Once the initial novelty wore off, the poster had to start making more overt predictions in order to keep the attention of his audience, at which point it became clear that he was not "in the know." And even if all of it is true and we see a version of this team on film, what are the odds they'll keep "Masters of Evil" as a name? I didn't hear Magneto calling his group the "Brotherhood of Evil Mutants" in the X-Men films, and even in the comics, Savage Dragon's classic villain OverLord has removed the word "Vicious" from his group The Vicious Circle.

Avengers 2: Will We See the Masters of Evil?