We got a few new, fleeting moments of Avengers: Age of Ultron this week and, as you might expect, the Internet has been dissecting them over and over again for days.

Let's join them, shall we?

What'd we see in this new trailer? What is there to expect from this summer's biggest blockbuster? Read on...and let us know if we missed anything. 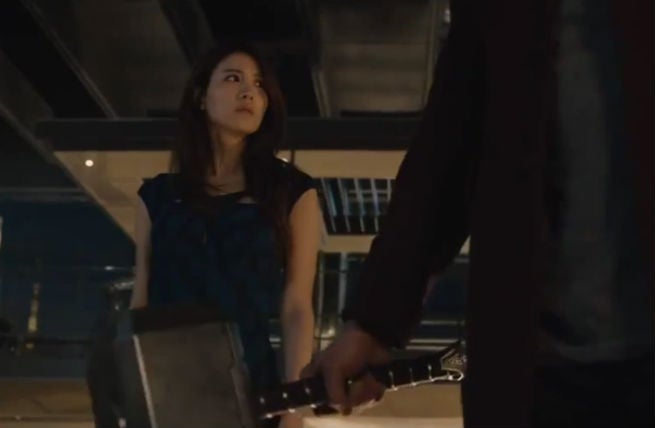 While Disney/Marvel technically confirmed already that it was Claudia Kim who was the "extra" woman at the Avengers' party scene when Ultron attacks, there continued to be fans online who essentially took an "I'll believe it when I see it" approach, for various reasons.

Well, we've seen it now. Kim was pretty clearly visible behind Thor's hammer-hand in at least one shot.

Of course, who it is she's playing...that's another mystery altogether.

This isn't going to be a cold and sterile artificial intelligence; we get Ultron laughing, suggesting perhaps that his attention-grabbing "no strings on me" line is more tongue-in-cheek even than previously guessed.

It's always interesting to see how various writers approach not only Ultron, but AI characters in general; those who have a sense of humanity and emotion tend to be more compelling if they have to be onscreen for a long time and provide more to the plot than just "powerful bad guy" moments.

His "I know you mean well" is also interesting because it suggests, at least at first, that he doesn't have any particular problem with The Avengers, per se, so much as humanity in general. That's an interesting characteristic in an arch-nemesis.

Ultron has pretty much the same mission statement as any number of artificial intelligences: he wants to make the world better, but sees humanity as an ailment that needs curing.

He lays that out pretty clearly in the first thirty seconds or so of the new trailer, before sending a barrage of drones at the Avengers. And his "I'm going to show you something beautiful..." speech indicates that, somewhere along the way, he gets it in his head that suffering is art.

We get a look at Scarlett Johansson's Black Widow examining a video of Loki's scepter on a tablet computer. Why?

Well, we saw that it fell into evil hands last time around. Maybe she just wants to see if there's a way to track its energy -- or minimize its damage, should it turn up again.

That it was recently confirmed his sceptre contains an Infinity Stone could be a key to Hydra's plans, or just to the future of the Marvel Cinematic Universe which, as we know, is building to Infinity War.

Of course, it's not her hand holding the tablet (maybe Cap's or Hawkeye's? The leather jacket doesn't scream Banner or Stark). Perhaps this is casing the joint before they move in on the stronghold where the twins were being held at the end of Captain America: The Winter Soldier. 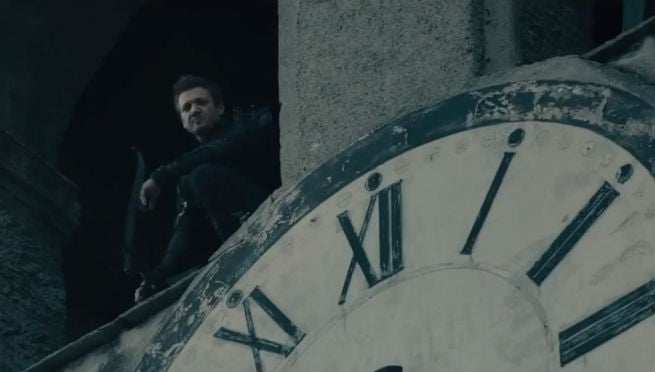 Hawkeye didn't have a lot to do in Marvel's The Avengers -- something that reportedly didn't sit all that well with rising star Jeremy Renner. But he's everywhere in this trailer, suggesting a much larger role this time around. Considering that he's got a lot of demons (as hinted at in the first film), and Scarlet Witch will apparently be bringing the heroes' inner torment to the surface at some point, driving a lot of the action, it makes sense to expand his role...even if his original part as "Agent of S.H.I.E.L.D." is no longer tenable.