The Avengers have assembled on four new covers to Vanity Fair magazine.

The four covers divide the Marvel characters up into seemingly random groups. One has Iron Man (Robert Downey Jr.) with Falcon (Anthony Mackie), the newly blonde Black Widow (Scarlett Johansson), and Thor (Chris Hemsworth), who seems to have regained his eye and hammer. 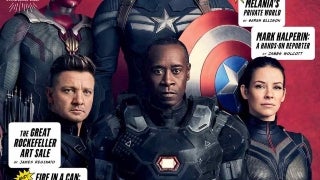 These covers seem likely to be the result of the big, secret get together that so many members of the Marvel Cinematic Universe attending in October. Take a look at the covers in the gallery.