For a while, Ghost Rider was a mostly forgotten b-list Marvel Comics character, remembered mostly for looking cool and for two not-so-great Nicholas Cage movies.

A couple of years ago, all of that began to change with the revitalization of the concept in All-New Ghost Rider, featuring brand new Ghost Rider Robbie Reyes.

Ghost Rider's popularity has only grown since then. The Ghost Racers miniseries tie-in to Secret Wars reminded everyone of all the other Ghost Riders who have been a part of the legacy, and now Robbie Reyes is played by Gabriel Luna in every episode of Agents of SHIELD Season 4 so far.

With Ghost Rider's popularity surging, and with Robbie's Marvel Cinematic Universe origin about the be revealed, now seemed like as good of a time as any to look at each of Marvel's Ghost Rider characters and decide who wore the Spirit of Vengeance, and whose Penance Stare could use some work.

In this article we're ranking only Ghost Riders who have carried a Marvel Comics series on their own. We're not looking at every minor Ghost Rider character that has carried the name at one time or another in history. We're also not counting the Phantom Rider, since he was originally a Ghost Rider in name, but not by the modern definition of the concept. Finally, we're only looking at the primary version of any given Ghost Rider, so there's no Ultimate Ghost Rider version of Johnny Blaze to be found.

With all of that out of the way, here's our ranking of Marvel's Ghost Riders.

Alejandra Jones was created by Rob Williams and Matthew Clark during Marvel's Fear Itself event. Her origin story is unusual for a Ghost Rider, as she was actually trained to take on the role of Ghost Rider by Adam, the first man, and the creator of sin.

Jones first outing after becoming Ghost Rider was gainst Red Skull's daughter, Sin, who had been transformed by the Serpent into the monstrous Skadi. She put up a fight, but Jones couldn't beat Skadi.

After that, Adam took control of Jones and used her to further his plot to remove sin from all mankind, turning them into emotionless drones. Johnny Blaze had to stop her, though it wasn't easy.

Blaze tried to teach Jones how to be a better Ghost Rider, but she went against his orders and traveled to Las Vegas to challenge Blackheart. Despite getting backup from X-23, Venom, and Red Hulk, Jones wasn't up to the task. She had to pass the Spirit of Vengeance mantle off to Red Hulk to get the job done. She regained the Spirit of Vengeance later but used it to pursue a selfishly motivated personal quest. Realizing this, she eventually gave the Spirit back to Johnny Blaze.

The problem with Jones is that she's never really found her place in the spotlight. She's constantly cast in Johnny Blaze's shadow or ends up being the weakest link a team like the Circle of Four. There's a lot of potential in Jones, but she's yet to realize it.

Zero isn't a Spirit of Vengeance at all, but a cybernetic being with Zero's own memories and personality uploaded into him. Zero was originally a hacker who was killed for stealing information from one of the dystopian Marvel future's evil corporations. He survived just long enough to upload his own consciously into digital space, where he was found by an artificial intelligence and uploaded into the cybernetic Ghost Rider body.

While not a Spirit of Vengeance, Zero certainly took to the same basic idea. He spent most of his time as Ghost Rider 2099 seeking revenge on those responsible for his death and ruining the plans of the company responsible, including his father, who was their faithful lackey and had a hand in his son's death.

Ghost Rider 2099 wasn't a very successful series for Marvel Comics and was canceled after just 25 issues. Many plot threads concerning the character were left unresolved, and Hero didn't feature prominently in the 2099 books that followed. Hero has made a few appearances since Ghost Rider 2099 was canceled, including in Timestorm and in Ghost Racers, but failed to leave much of a mark, even with a chainsaw hand. 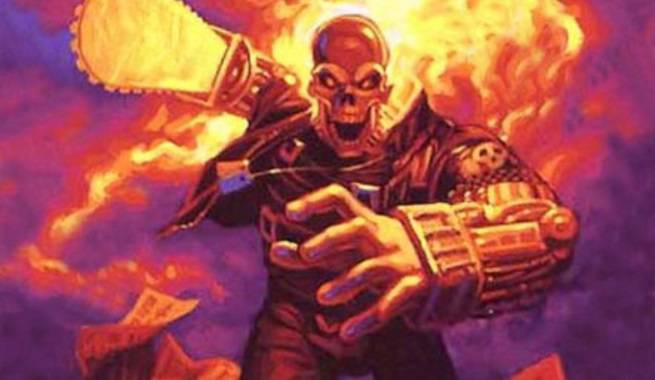 While original Ghost Rider Johnny Blaze was retired from his life as a Spirit of Vengeance, Daniel Ketch stepped into the role as the Ghost Rider of the 1990s.

At first glance, Danny doesn't seem much different than Johnny, though his appearance is a bit grittier, fitting into the 1990s aesthetic. Danny also added a psychically controlled chain to Ghost Rider's arsenal, and his futuristic-looking motorcycle could lower its armored face to be used as a battering ram.

Ketch sought out advice from Johnny Blaze during his time as Ghost Rider, and it was later revealed that Ketch was Johnny's long-lost brother. The key difference between Danny and Johnny as Ghost Rider was that Danny actually got along with the demon possessing him. This is because, as it turns out, the "demon" was actually Marvel' Angel of Death and Judgment.

Ketch appeared to die at the end of his Ghost Rider series, which lasted for more than 90 issues. That turned out not to be the case, as he started popping up in other books around the Marvel Universe not too long after.

When Ketch reemerged in the late 2000s, he was struggling with addiction. Zadkiel, the Angel who possessed him, kept Ketch alive, but it came at a cost. More Ghost Riders were popping up around the globe, and Zadkiel wanted Ketch to take their power to avoid corruption by human flaws. It turned out Zadkiel had a more selfish motive in mind, but he kept them secret. Eventually, Blaze and Ketch managed to team up and stop Zakiel's plans.

Daniel Ketch may not have been easily distinguished from his predecessor, but he managed to keep the Ghost Rider mantle alive and expand the character's overall mythology in interesting ways.

Reyes' origin is unique among the other Ghost Riders. He didn't make any deal with the devil or become possessed by a demon. Instead, he was murdered and became possessed by a spirit. It took some time, but Robbie eventually discovered that he was possessed by Elias Morrow, his satanic serial killer of an uncle. Eli also pushed Robbie's mother down the stairs while she was pregnant with his brother, Gabriel, causing Gabe's developmental issues.

Robbie struggled with Eli for a while, even losing control of his body entirely while Eli exacted revenge on the gangsters responsible for his death. Eventually, with a little help from Johnny Blaze, Robbie was able to regain control. He's been off the comics page since then, while the Marvel Universe was going through Secret Wars, but he's set to return in a brand new series as part of Marvel NOW!

Robbie brings a unique perspective to Ghost Rider. His life as a teenager growing up in a struggling neighborhood in East Los Angeles and his connection with his brother both add new wrinkles to the Ghost Rider formula that make him truly stand out. As Johnny Blaze said when he met Robbie, he may not be possessed by a demon or indebted to Mephisto, but he's still a part of the Ghost Rider family.

It's can be hard to top the original, and that's definitely the case with Ghost Riders. Johnny Blaze was created as the first Ghost Rider by Roy Thomas, Gary Friedrich, and Mike Ploog, and set a high bar by which all other Ghost Riders are measured.

Johnny Blaze was a motorcycle stuntman who was orphaned by his parents. His mother left the family (and was later revealed to be a Ghost Rider herself), and his father died in a stunt crash. He was taken in by fellow motorcyclist Crash Simpson and his wife. When Crash was diagnosed with terminal cancer, Johnny made a deal with the devil. More specifically, he made a deal with Mephisto. Johnny sold his soul in exchange for Crash being cured of his cancer. Mephisto stayed true to his word, but Crash died in a stunt crash soon after, making Blaze's efforts seem futile.

The deal left Blaze with a demon named Zarathos attached to his soul, granting him the powers of the Spirit of Vengeance and transforming him into Ghost Rider. Johnny and Zarathos would continually struggle for control of Ghost Rider's soul.

Every Ghost Rider in the Marvel Universe Ranked