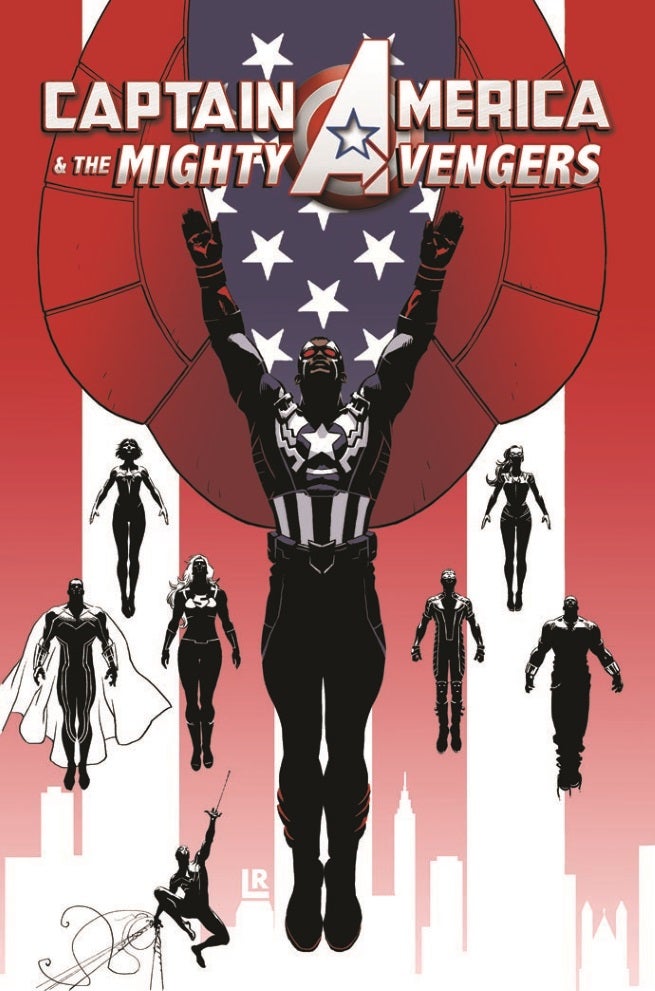 You're breathing fairly rarefied air here; not many writers get to relaunch their own title since the Marvel NOW launch! How far in advance did you know the plans?

Al Ewing: I've know for a month or two about the relaunch, and I've known about Sam for much longer. Issue #15 was always going to be a Sam Wilson special, showing him in the role of Captain America, but over the course of time, what with us finishing up a massive story arc just before, it started to seem like a good opportunity for a relaunch and a new "season" for the book.

It's not like this is Sam's first appearance with the team. How does the fact that he's wearing THAT costume change the way you approach the character?

Ewing: Well, from the get-go I've been treating Sam as the consummate super hero - for some missions he's a street-level crimefighter, but he's also a James Bond style secret agent, breathing the rarified air of Maria Hill and Nick Fury, and at the drop of a hat he can go into space with the Avengers to battle cosmic threats beyond imagination. He's comfortable operating at any level.

But Captain America is the ultimate level - the very top of the pyramid. I've got this idea in my head of Cap as the highest office in the super-heroic land - wearing that suit brings a level of power and responsibility unlike any other. You're not just wearing a costume that represents you, you're wearing one that represents an entire country on the world stage. Everything you do is under incredible scrutiny. So while Sam is one of the best people for that job - it is one hell of a job.

There's obviously some powerful symbolism behind just having a person of color wearing Captain America's costume. That's been explored a bit in past stories like Isaiah Bradley's. Is that something you'll delve into here or is that more for the solo title?

Ewing: It's something that'll come up. The first page of Captain America & the Mighty Avengers #1 is the reaction from ordinary New Yorkers, but we'll also be seeing how the other Mighty Avengers react, and seeing what they make of it.

Plus - I talked about that scrutiny earlier that Captain America's under, but it goes double or triple for Sam. He does not have the freedom to make many mistakes while wearing that suit, because the media and the public - and, yes, the readers too, on a meta level - are going to be watching every single move he makes. And some of them will have their knives out, waiting - not that they'd ever admit it, of course.

Have you read Mark Waid's two-parter where Sam was Captain America for a minute? It's worth a skim, and reflects basically that wearing the costume for a single mission didn't change his approach to the job.

Ewing: I have! It does speak a little to the idea of Captain America as a concept - when Sam puts on the suit in that story, it's to redeem the concept, the idea of Cap, after it's twisted and co-opted by racists and fascists. He's taking it back. This is a different situation, but it's still Sam wearing the concept of Captain America as much as he is the suit itself. It's more than just wearing a costume - it's becoming the caretaker of a dream. That's powerful stuff.

There are a strong voices on the team. While the characters are not typically competing, per se, is it a challenge to write a team where there are more leaders than there are rank-and-file members?

Ewing: Yeah - I mean, the nice thing about these particular leaders is that they're not egotists. None of these people are Doctor Druid - they know how to take orders as well as give them. So usually Monica's the leader in the field, and if she's not around, someone else will step in - it's all fairly seamless, maybe because nobody was thinking about power struggles, just about getting the job done. Of course, now that Sam is wearing the Captain America costume, there's going to be a public perception of him as leader of the team. The book's got the right title that way - whenever the news mentions them as a group, it's not going to be "The Mighty Avengers did this today, yadda yadda" - it's going to be "Captain America and the Mighty Avengers fought so-and-so, blah blah blah." So we might start to get some tensions creeping in.

Obviously Sam isn't Steve, but he still, at least to my thinking, remains an inspirational figure. Generally speaking, this book hasn't been quite as dark and dreary as many superhero team books. Is Captain America kind of a natural fit?

Ewing: It does fit right in! One of my very favourite Cap periods is when he was driving around on his motorbike helping people with problems. Cap's Hotline was one of the big inspirations for the Mighty Avengers, and the whole ethos of the Mighty Avengers - that anyone can join, that everybody has their role to play and their own way to help out - that's a very "Captain America" way of thinking.

What's been teased with Spider-Man, Luke and Jessica is part of the reason I love your book. So few comics anymore spend a lot of time on life outside of the punching-badguys part -- team books doubly so. What makes you focus on the character stuff as much or more than plot?

Ewing: I don't know! I just do. Sorry, that's a terrible answer... I suppose I feel that the best plots spring organically out of the characters to an extent, and as this is a team of people who haven't had so much play elsewhere, for the most part, I've been really keen on making readers interested and invested in them as people. That just seems like a no-brainer if I want these characters to survive past the end of my stint on them - I've got to make readers want more.

With Cap and Spidey, you're juggling some valuable IPs and some characters who ALWAYS have their own stories going on. How do you manage that aspect of the title?

Ewing: Continuity-wise, I just keep a close eye on what they're up to and try to stay in the loop. The editorial team on my books is fantastic, and I'm always given loads of warning if something big's happening. Character-wise - I think there's a little freedom to play around, especially with someone like Spidey. I kind of enjoy playing him for laughs a little bit.

The lineup has always been a bit flexible. Is there anyone you'd like to use and haven't yet, or who we can expect to see joining the team soon?

Ewing: In my first conception of the team - literally at the email stage, before the pitch even - I wanted Sandman in there. That was my nostalgia pick - I really liked Sandman as a reformed criminal trying to make good. I'm always hoping they'll come a time when the Avengers are stopping Sandman robbing a bank and then some universe-threatening beastie arrives and everyone drops everything to fight it - including Sandman, because he's an Avenger too.

Maybe one day. See, this is the thing about the whole Sam-as-Cap business - I'm about to do my "when I was a kid, Wally West was the Flash" speech here, but it's so important. There are going to be kids picking up their first Marvel comics over the next few months and Sam Wilson will be Captain America and they will think "wow, that's so cool". And they will never forget. I know I never forgot.

Luke Ross is a huge talent. Your artists on this title have been top notch since the word go, and a few pages in you were already challenging them with giant Watchmen-squids. What's the craziest thing you're going to throw at Luke?

Ewing: Wouldn't you like to know! Things are going to get crazy. Crazier than Greg ever had to deal with. I'm going to be throwing things at him that I never even threw at Henry Flint, and I once made Henry draw the psychedelic awakening of an entire planet.