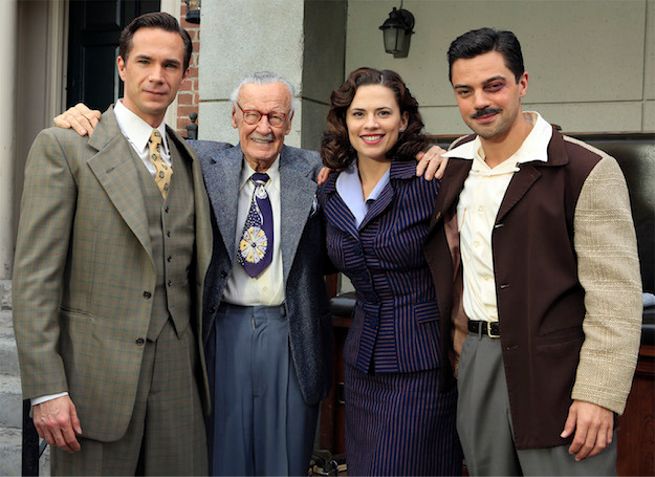 At 92, Stan Lee was already working with Timely/Marvel when the events of Marvel's Agent Carter are set, but apparently the version of him who lives in the Marvel Cinematic Universe was busy because it's the modern-day Stan who will make a cameo appearance in the series, not his younger self.

That's for the better, anyway; finding the younger Stan to cast in the show could have been difficult.

TVLine has the first photos, as well as a description of the episode -- airing on January 27 -- and of Lee's involvement in it:

In "The Blitzkrieg Button" (airing Jan. 27), Peggy may be in more trouble than usual when fugitive Howard Stark suddenly returns for mysterious reasons. Meanwhile, Chief Dooley chases — all the way to Europe — a new clue that threatens to destroy Peggy's future at the SSR.
In the episode, Lee plays a man who has a brief interaction with Stark (played by Dominic Cooper) that brings a moment of levity to the episode – much like his cameos in ABC's Agents of S.H.I.E.L.D. and filmdom's Captain America movies, The Avengers and Guardians of the Galaxy.

You can see another photo and some more details at the link above. 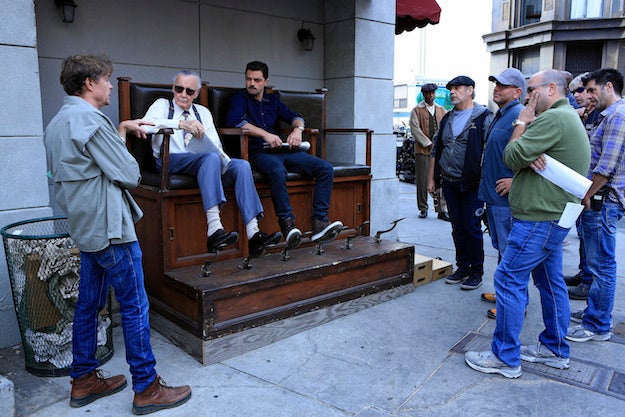 The next episode of Agent Carter airs tomorrow night at 9 p.m. ET/PT on ABC.