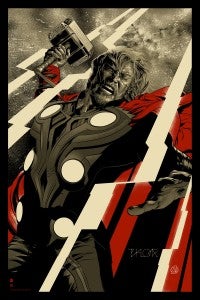 Think you'd like to see more super-stuff from director Guillermo del Toro? Besides the fact that he's reportedly considering a third installment of his fan-favorite Hellboy franchise, think on this: the director could have been tapped by Marvel Studios to direct Thor, or even by Fox to produce the Marvel-created X-Men spinoff, The Wolverine. Of course, those jobs went to Kenneth Branagh, who turned out a pretty impressive take on the God of Thunder and set the stage for Marvel's The Avengers, and to James Mangold, who just began filming The Wolverine in Australia, but del Toro discussed the possibilities in a new interview with Collider. Says del Toro of his circuitous road to the upcoming Hulk TV series:

Over the years, when Avi Arad was in charge of Marvel, I often had the discussions with him.  I came very close to doing Thor because I really wanted to bring the Norse mythology… It's something I'm very attracted to.  Create the giants and create the more fantastical version of that.  But it's not like I have many meetings with studios discussing superhero movies.  They come to me.  Normally I pass, respectfully or not.  They like it, that we have a very quick response.  I was very attracted to doing The Wolverine in Japan, because that's my favorite chapter in the story of Wolverine.  But I'm not a superhero guy.  It's very hard for me to… It's one thing to like something and another to marry it for two, three years. I spoke to [Fox executive] Jim Gianopulos a while ago.  I thought about it.  I actually met with Hugh Jackman.  But it's one thing to say… You have to differentiate between loving it as a fan, which is almost like dating, and creating it from scratch, which takes two to three years of your life, which is like a marriage.

Wait a second, a marriage is three years out of your life? My wife is gonna be really excited to learn she's not stuck anymore!