Marvel Comics has officially announced its next cosmic event, Infinity Countdown, and with the reveal of the covers for the first two issues comes the reveal of who will possess the Infinity Stones.

The series kicks off in March from the All-New Guardians of the Galaxy team of Gerry Duggan and Aaron Kuder. The Infinity Stones were thought to be lost forever but have suddenly reappeared and fallen into the hands of an eclectic group of Marvel heroes.

As revealed in Marvel Legacy #1, Logan now possesses the Space Stone. Captain Marvel controls the Reality Stone. Gamora has the Power Stone. Loki – who was previously trying to get his hands on the Space Stone – now holds the Mind Stone in his scepter. The Super Skrull has possession of the Time Stone and Adam Warlock – or is it Magus? - controls the Soul Stone.

As the heroes hunt for the Infinity Stones, a powerful weapon is being forged in the background, and a powerful new threat is unleashed on the Marvel Universe. The story stands to affect every Marvel hero, from the Avengers to Spider-Man to the X-Men, even bringing about the end of the Guardians of the Galaxy.

“As we worked on the Infinity Stones’ story, it became clear the story was much bigger than we could contain in the Guardians of the Galaxy series,” said editor Jordan D. White in a statement. “It starts with the Guardians, but the story extends out into the entire Marvel Universe, with stones popping up in some VERY surprising places. Countdown is the next step in the story…but as the name implies, it’s leading to something even greater.” 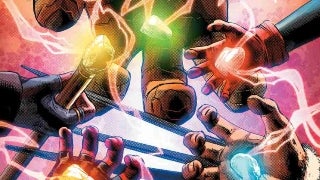 The story begins in February with Infinity Countdown Prime #1 written by Duggan with art by Mike Deodato. The 48-page issue reveals the location of all six stones as the countdown begins, along with a prose primer that details the saga of the Infinity Stones, and how they came to be in the Marvel Universe.

The story continues in March with Infinity Countdown #1, where the heroes come together and begin down a dark path towards the possible end of the world.