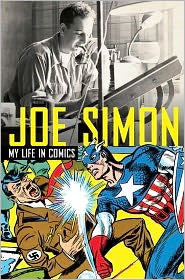 In reading comic book icon Joe Simon's book My Life in Comics, there was one line that struck me as encapsulating not only Simon's residency in New York, which is what the line was referencing, but his status in comics as well. Succinctly and to the point the line reads, "More than seven decades later, and I'm still here." Anyone who reads My Life in Comics will understand that sentence and see how rich and vital Simon's presence and importance to comics is. He is a pioneer, an artist, and a storyteller, both in the pages of this rich memoir and in his work throughout the comic book industry. To read Simon's history in comics is to take a journey that has a set destination in mind, but that takes plenty of side trips to interesting and carefully crafted sights and people. Very little detail has escaped Simon's memory over the years, and the narrative flows as a wizened grandfather's own story would, with wisdom interlaced with the witty and clever tales and serious setbacks laid out here in this honest memoir. Part of the delight of Simon's work is in learning about all the people he has met and interacted with over the years, from sports legends to film stars to comic book icons of their own right. Each detail is nuanced with grace and fierce attention to detail, all the while the past and the future blend together in a way that makes sense and lends a casual ease to Simon's clear storytelling abilities. Those who may only know Simon from his collaboration with longtime partner Jack Kirby in creating Captain Americamight be surprised to learn of his involvement with many early comics, such as Captain Marvel, and the amount of legal wrangling and behind the scenes moving and wheeling that went on between the artists, inkers, letterers of early comics. Simon recounts his many trips to the witness stand throughout the years with witty detail, often stumping attorneys who seemed to be approaching Simon with one-ups-manship in mind, only to be stymied by his quick thinking and cool. Nothing is considered too trivial or minute to put in here, as Simon takes his time to develop each of his years, highlighting his time with the Coast Guard, his development and work with Sick magazine, and his casual conversations and jokes with friends over the years. One consistent piece of this book is the humanity that Simon always manages to weave into the stories of his life in comics. It's easy for fans to view their favorite creators, writers and artists as simply items on display to admire, but Simon reminds us, in touching details about his family and his wife's tragic passing, that the "Life in Comics" part of his title applies to more than just what happens in our favorite four-color fantasies. Another treat of the book is the vast collection of sketches, early art work and covers from comics that Simon worked on over the years, and there are plenty of pages of full color copies of Simon's work to keep fans interested and informed along the way, in complement to the many wonderful black and white pieces throughout. It's this mix of clear, colorful detail and interesting contrasts of black and white, not just in the artwork but in the stories, that makes My Life in Comics such an engaging read. Whether he's detailing the fear of the 1950s and the new Comics Code or telling how a hot fudge sundae helped shape Captain America's villains, Joe Simon's memoir is essential reading for any fan of comic book history and storytelling. The book is out in stores Tuesday, June 21st 2011!