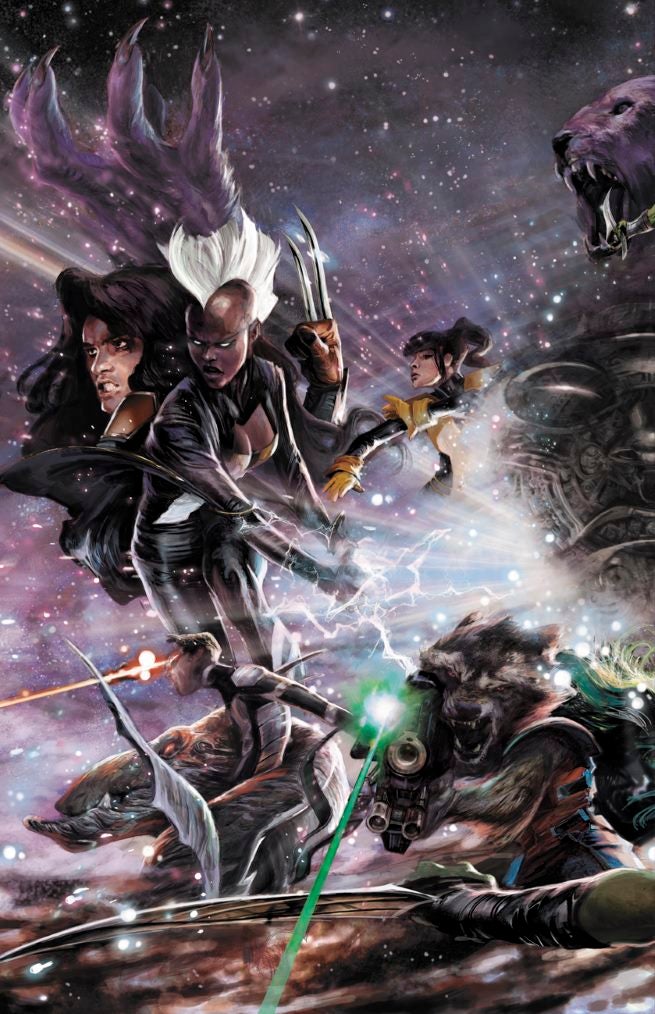 Following 2014's "The Trial of Jean Grey," the Guardians of the Galaxy and the X-Men are teaming up again for new crossover: The Black Vortex. The events sees The X-Men take to the stars to assist the Guardians in tracking down the mysterious and powerful artifact, The Black Vortex, which may have already fallen into the hands of the nefarious Mr. Knife. The Black Vortex is a tempting and dangerous object, which shows those who gaze into it "cosmically enhanced" versions of themeselves.

The series begins in February with Guardians of the Galaxy & X-Men: The Black Vortex Alpha #1, and will continue weekly, through the various interconnected titles.

Today, ComicBook.com is on call, talking to writers Brian Michael Bendis (Guardians of the Galaxy, All-New X-Men, Uncanny X-Men) and Sam Humphries (Legendary Star-Lord), as well as editors Mike Marts and Katie Kubert, about what's in store for these two teams. Keep your eyes here for live updates, and check the gallery at the bottom of the page for new art from several books tying into The Black Vortex, plus Ed McGuinness' designs for some of the cosmically enhanced characters.

Marvel's press magician Chris D'Lando asks about the genesis of the series. Humphries says it was brought on partly be the popularity of Marvel's growing cosmic line, including Legendary Star-Lord and Rocket Raccoon. The story grew as more of the writers' fellow Marvel writers heard about it, became excited, and wanted their own characters (Captain Marvel, Nova, etc.) to become involved.

Well several writers are involved, Bendis and Humphries will write the majority of the chapters, and Humphries is the event's "showrunner."

Humphries says the event is a "huge undertaking," with so many creators and tons of characters. Its rewarding to see art pages coming in (see gallery below). Mike Marts echoes this sentiment, and says Humphries has been a huge asset in making the event work.

D'Lando asks Bendis about how the writers are splitting up writing duties. Bendis says everyone is playing to their own strength. "Always let everybody do the thing they do best." He says that artists are always eager to draw cosmic stories, says readers who don't know what to expect can expect page after page of excellent artwork.

Humphries quotes Patriots coach Bill Belichick "In crisis situations, always think of players, not plays." Advice he has taken in coordinating The Black Vortex, says each character involved gets a moment to shine. Kelly Sue DeConnick will have a huge moment for Captain Marvel, several big X-Men moments from Bendis, big Nova moment from Gerry Duggan.

D'Lando brings up the many great artists on the series, including Ed McGuinness, Andrea Sorrentino, Paco Medina, Valerio Schiti, and more. Bendis says they are writing to each artists strengths, that doing that is how they make their living. Sorrentino was eager to draw cosmic after handling the Uncanny X-Men and All-New X-Men Annuals. Valerio Schiti wanted big set pieces, and they gave them to him.

Humphries describes The Black Vortex as "an artist lover's event."

D'Lando describes McGuinness' "comically enhanced" designs as looking like the coolest action figures ever. Humphries says McGuinness was very excited when he heard about the context, took the details of the Black Vortex and ran with it. Not just new costumes, but new powers and characteristics. Humphries says he rewrote some fo the outline to give the cosmically enhanced characters more time in the spotlight, because McGuinness made them so interesting.

Moving onto the plot: Star-Lord has discovered that Mr. Knife is his father, and Kitty Pryde is heading to space to rescue him. This is where the Black Vortex picks up.

Humphries says the deposed Jason of Sparta thinks of himself as an empire-builder, rather than a criminal. Kitty and Star-Lord on cosmic honeymoon, end up entangled in Mr. Knife's plan and have to call in help from friends.

Bendis jokingly says he believes all comics will eventually revolve around the Peter Quill/Kitty Pryde romance. Bendis says the X-Men have been tied to space since the Chris Claremont days, and has wanted to get them back out there since the end of Trial of Jean Grey.

Is everything going to be put back the way it was when we're done, ahead of Secret Wars? "Absolutely not," says Humphries. Bendis says not everyone is making it back, and some of these cosmically enhanced character designs are too good not to keep using. Particularly with the X-Men, people will be surprised with the outcome.

Bendis says The Black Vortex is darker than The Trail of Jean Grey, need is greater. There will still be humor, but the story will grow genuine camaraderie between the two teams. Humphries says the characters will be surprised at home much they reach outside of their own team for help.

"We've all seen, in the Marvel Universe, what happens when people get too much power too fast," says Humphries. He goes on to say the characters will be put in situations where sometimes they don't have choice. "Anyone in these books are fair game."

Bendis says the Beast is a character struggling with being the smartest man in the room and making hard choices. Bendis says Hank is given a level of cosmic knowledge that anyone like Hank would literally give up his whole life for.

Opening up to questions! How did fan response to the Kitty-Quill romance impact the story? Bendis says, after Trial of Jean Grey, a long distance relationship seemed fun. Response is hilarious, but doesn't alter what they're doing. "We have to tell the story the characters are dictating to us." It does make them happy when people are happy about it, as relationship plots reveal things about the writers. It inspires them to go forward, but would never convince them to stop. Humphries says its overwhelming, particularly after their first kiss, but its really gratifying as well. "We're telling the story of who these characters are, and that stays true no matter what." Fans of the relationship will be on the edge of their seats with every chapter of The Black Vortex.

Will the reaction to the Black Vortex by the young X-Men be different than their older counterparts? Bendis says its interesting because they lack the personal experience, but have heard the stories of what happens when you gain too much power, particularly for Jean Grey. Bendis says that just because the power is offered, doesn't mean there's a downside. Angel is another example.

Asked about the cosmically enhanced character designs, Humphries says McGuinness knows his Marvel history and how to mix the old with new. "The energy of Kirby without being a Kirby ripoff," adds Bendis.

They're asked about Drax's design in particular, and how it draws from Thanos, as noted by McGuinness in the sketches. Humphries says some of McGuinness' notes became part of the story, and some didn't.

Our turn: Any conflicts of leadership, or new cross-team romances? Bendis says they're both teams of outsiders, forced to try to make the world/galaxy better. This shared spirit makes them obvious friends, once you look at it. "Sometimes its exciting to be unique, and sometimes its f***ing depressing to be unique." Humphries adds that the Black Vortex has many connections between characters that you wouldn't expect, little things from their histories that make them instantly love or hate each other. The high stakes add fuel to the intensity of these relationships. Bendis says, while he loves Kitty and Colossus, there's an argument that that relationship has run its course.

What challenges did they face trying to bring the characters into the same storyline? Trying to write anything but them making out all of the time, and figuring out how the X-Men get into the space. Humphries says he enjoyed breaking up and recombining the teams. References X-Men/Alpha Flight as inspiration.

What does Bendis think Sorrentino brings to the X-Men franchise? When someone of such unique perspective and talent becomes available, it makes you want to write better and get out of the way at the same time. He also says that they have already locked in their next project at Marvel together, which couldn't be more different than the X-Men Annuals or The Black Vortex.

Are they seeing a kind of mainstream response to their work, from the success of the Guardians of the Galaxy movie? Humphries says he has heard people reading Star-Lord, Rocket Raccoon, and Guardians who are not previously familiar with the characters, says it makes it a great time to be telling big stories like The Black Vortex. Bendis says teens and pre-teens come out of the movie excited, and eventually realize there's a lot more of what they love if they are willing to read. Fans realize they'll only see an X-Men/Guardians team-up in comics. Audience changes to newer readers after the movies.

And that wraps it up! Let us know what you think of the Black Vortex in the comments below. The event begins February 4!