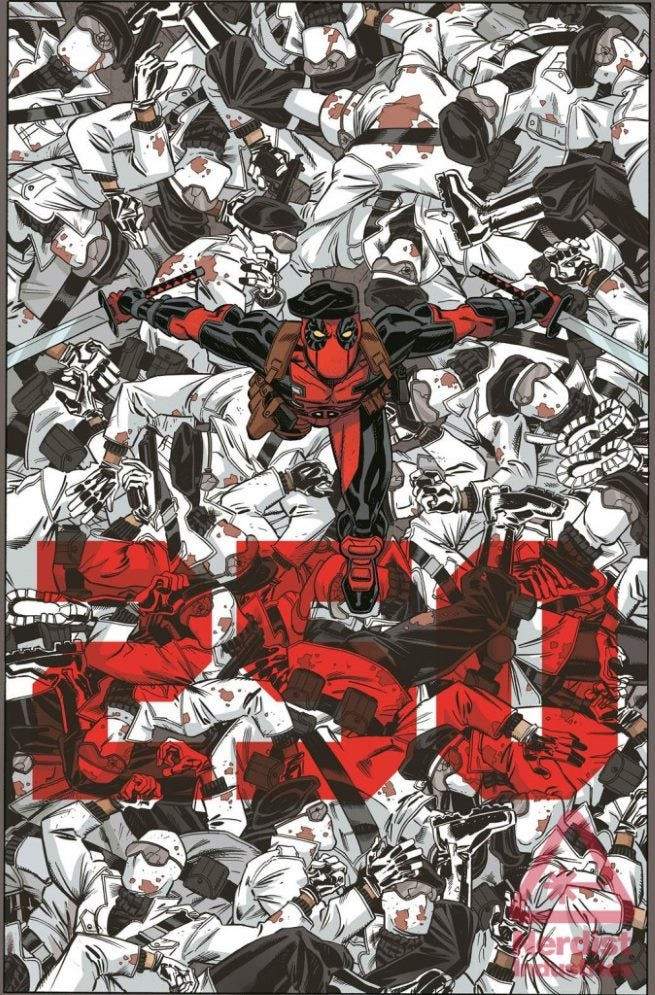 Marvel Comics has announced, via Nerdist, that they will be killing Deadpool in April's Deadpool #250, which will be the final issue of his ongoing series.

The issue will be an all-star writing and art jam, with some of the most popular creators from Deadpool's past contributing to the issue, including writers Gerry Duggan, Brian Posehn, Ben Acker, Ben Blacker, Nick Giovanetti, Paul Scheer, Jason Mantzoukas, and Mike Drucker, and artists like Scott Koblish and Mike Hawthorne.

"In all honesty, the story that you're going to get in Deadpool #250, is a story that we really have been building to since the first issue of Deadpool NOW," says Gerry Duggan, who has co-written the series with Brian Posehn since its most recent relaunch. "And it will absolutely feel – it will feel, I hope, readers will think that this is an appropriate end for this Deadpool."

Marvel's SVP of Sales & Marketing, David Gabriel, hinted at the Death of Deadpool in September, during an exclusive interview with ComicBook.com.

"Oh and speaking of death, we were just talking about the upcoming death of a character in March in issue #250 of a character with the word Dead in his name," Gabriel said in the interview. His timing seems to have been slightly off, but close enough.

Deadpool is the second major character known for being particularly hard to kill that Marvel will be shuffling off this mortal coil, following Death of Wolverine in 2014. Of course, nothing lasts forever in comics, and many fans will project a resurrection for both characters before their next respective movies hit the big screen.

FINAL ISSUE!
That's right—if you add together all the Deadpool series (creatively) issue 45 is the big 250th issue of Deadpool! What better way to celebrate than to end the series? In our over-sized main story, ULTIMATUM comes at Deadpool for revenge, so he has no choice but to take them on—ALL OF THEM. Then, in an Infinity Gauntlet crossover, what would Deadpool do if he got the six gems from Thanos? Plus: a slew of stories showcasing Deadpool's closest friends and allies by special guest writers! Also, SPOILER: Deadpool dies at the end of the issue.

Marvel Announces The Death of Deadpool