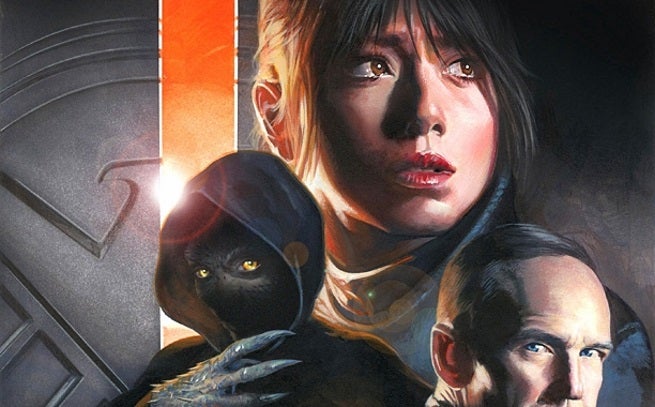 Marvel Agents of S.H.I.E.L.D.has begun their "Art of Evolution" promotion for the second of the show's second season. IN the same spirit as last season's "Art of Level 7" series, the series will see new posters highlighting key events and themes from each week's episode of Agents of S.H.I.E.L.D. through the season finale.

The first poster is for the midseason premiere, "Aftershocks," and is created by Gabrielle Dell'Otto. Released at EW, the poster shows both Skye and Raina in their post-terrigenesis, Inhuman forms.

Of note, Dell'Otto co-created the character of Daisy Johnson, whom Skye was revealed to be in the midseason finale episode, along with Brian Michael Bendis.

While Skye seems mostly unchanged, physically, Raina's terrigenesis was much more drastic. Here's what executive producer Jeff Bell had to say about the character's appearance in Dell'Otto's posters:

I would say for this, it's not without base and some fact. It's representative, and it's his interpretation of certain things, and I think certain things here are quite different than how she'll look. But I think it's also hinting at the transformation. So when we approach them, we say, "we think this is interesting because of this or this." This episode is the aftermath of Skye becoming a superhero, and maybe we'll show them the script or let them watch the episode and let them respond to it emotionally and see what's interesting to them. And then we have a conversation with them about how we'd like to portray that, and then we try to lean into the strengths that they have. Some are more graphic, some are more character based, some are more composite, and some are cleaner. And that's one of the things we really look forward to each week, getting the initial sketches back from the artists and seeing their interpretation. It's really fun to see how each one is unique and different, and we hope fans want to collect all of them—I know I do!

Oscar Isaac Addresses Being Locked Into Marvel With Moon Knight