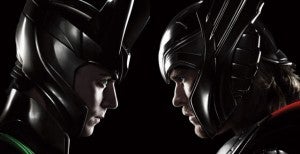 There was much wailing and gnashing of teeth among the most anal-retentive of viewers when Thor showed up in Marvel's The Avengers earlier this year after last year's Thor film had established that he didn't know how to return to Earth once he went home with the Rainbow Bridge destroyed. While this latest deleted scene from Thor--apparently set to be included on the forthcoming Marvel Cinematic Universe Phase One box wet--doesn't actually resolve that conflict, it does give a hint at Thor's return for a sequel, as opposed to the ending the movie eventually got, which was more about bringing Loki back. Check it out below.

New Thor Deleted Scene: Maybe We Can Help Him Find His Way Back