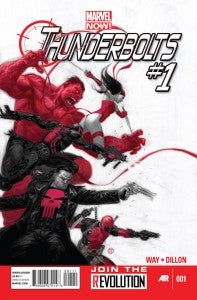 The Red Hulk will take charge of a team of some of the Marvel Universe's most dangerous anti-heroes in the relaunched Thunderbolts, just confirmed from Marvel Comics in a Newsarama feature. The cover at left reveals Red Hulk leading a lineup of killers that includes The Punisher, Elektra, Venom and Deadpool, in a stylized cover that splashes red everywhere. "The idea for this team of Thunderbolts actually came from a Marvel retreat, where ideas are flying fast and furiously," series editor Jordan D. White told Newsarama. "The question of how to shake-up Thunderbolts and take it in a new direction came up, and the idea of a Red Hulk-led team got the room excited. From there, the question became who he would tap for his team, and everyone agreed the main roster you see here (Punisher, Venom, Elektra, and Deadpool) would be an awesome team book. Looking for the right fit for this book as far as writers go, Dan Way was at the top of the list — and once we brought the idea to him, he leapt in with both feet, with tons of ideas of his own to add to the mix. He quickly shaped what was a rough idea for a team into a book with a specific idea and direction behind it... and added in a few more characters to the team, who shall be revealed over the first few issues." In addition to revealing one of the teased titles from last week (if you'll notice, this has that same rifle sight as the "lightning" teaser widely believed to be a Thunderbolts relaunch teaser), this issue sees artist Steve Dillon taking on The Punisher in a monthly title again, following the character's bloody romp through the Marvel Universe in the upcoming Greg Rucka-written Punisher War Zone. Dillon, who co-created Preacher with writer Garth Ennis, also collaborated with Ennis on a long and fan-favorite run on The Punisher.