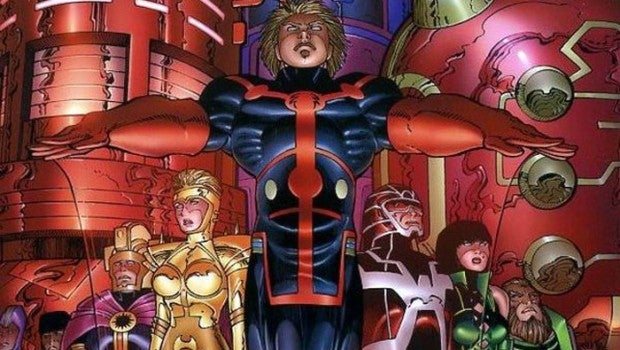 If there's one area that most fans agree Warner Bros. and DC Entertainment dominate their competition at Marvel, it's in the development of animated features.

For years, people have held that truth to be self-evident -- and it's hard to argue, for production values and the star power of the actors.

Where Marvel tends to score over DC's animation projects, though, is fidelity to the source material. Why? Becuase Marvel Knights Animation is basically just the bastard child of full-cast audiobooks and motion comics, creating a sleek and well-made animated feature that is the truest possible adaptation of a comic book store, all the way down to retaining the original art.

Out this month is The Eternals, from writer Neil Gaiman and artist John Romita, Jr. -- and it's pretty great, as long as you're not too bothered by the shortcomings of the format.

You can hear Gaiman's voice all throughout this project. The humor and humanity that these characters vocalize is pitch-perfectly his. What's great is that the voice actors are almost all terrific in bringing the roles to life, and the wry, clever dialogue Gaiman gives the Eternals comes across really well.

The strange, herky-jerky animation and stiff look of the movement in the Marvel Knights Animation can sometimes be distracting. The times when the movies themselves are best is when they're dialogue heavy, and when the style of art is open to that kind of adaptation. 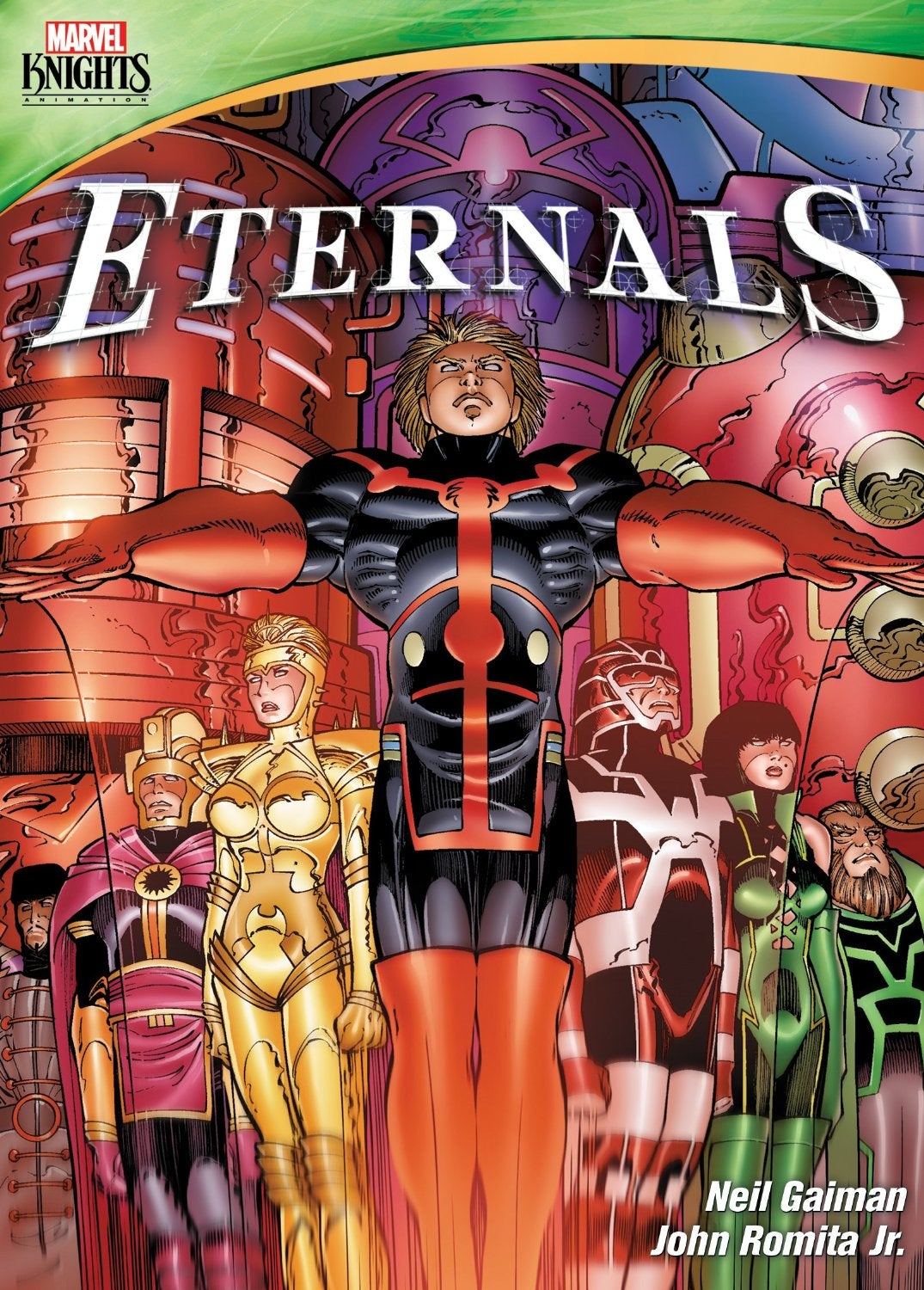 Jae Lee, for instance. His art looked pretty great when it was animated for The Inhumans. Here, Romita's works...mostly. His figurework has that kind of posey, Kirby-inspired look anyway, and that plays well for the very limited animation. There are bits where the dialogue-heavy nature of the work plays hell on the minimalist animation style, especially in an early scene where one character's smile never fades, lending him a bit of a psychotic feel. There are also some times when you realize that "Hey, that image wasn't meant to be animated or, for that matter, lingered on for two minutes while this dialogue is delivered."

Like The Inhumans, The Eternals is a Jack Kirby property full of huge ideas, big mythology and strange-looking characters and concepts. And the two, weirdly, bookend the second "season" of Marvel Knights Animation, with a bunch of Wolverine material -- Wolverine: Origin, Wolverine vs. The Hulk and Wolverine: Weapon X -- sandwiched in between. None of those others felt nearly as natural paired with the rudimentary animation of Marvel Knights as the Kirby-derived titles did.

So what's the verdict on The Eternals? It's really difficult to imagine how an audience will respond to it.

In all likelihood this will do better than most of the Marvel Knights Animation DVDs, in part because of Gaiman and Romita. Their names have cache and Gaiman's has been proven time and again (including with The Eternals hardcover) to drive readers to the comic shops who wouldn't ordinarily be there. The movie itself will likely be a sales success, and a "critical" success with buyers, mostly for the same reason the Joss Whedon Astonishing X-Men discs were.

Where it succeeds is everything listed above; Gaiman's dialogue crackles and it's always seemed that this story was a particularly good one, and well-suited to his talents. Morrison could have done a similar thing, but likely would have drained it of most of its humor and been accused of being too weirdly meta. Gaiman gets away with what he does here, in part, because stylistically you cannot mistake Gaiman for anybody else and the execution works.

Where it fails is that it falls into many of the same tropes as other Marvel Knights Animation projects. The Eternals was drawn with no idea that it would ever be animated, and many of the effects that look great as a static image are far less effective when the camera has to "hold" on them for 10 seconds while the effect plays itself out. Films are, also, at the mercy of their cast to really execute and while most of the voice actors in this are great, Trevor Devall doesn't nail Ikaris, and since he's key to the success of the project the whole thing can sometimes be wonky.

Devall does a great job with some other voices in the project, including The Avengers' butler Jarvis, and so it seems his work on Ikaris is a creative choice. It seems likely Devall meant to make the character seem detached and aloof, but instead he just seems bored. The delivery, combined with the improbable lines coming out of the character's mouth in the first couple of chapters, really has the effect of showing us why "Mark" might not believe this guy and might think he's a bit cuckoo, but it doesn't seem that's the intention.

All that said, is it worth the $14 you can pick it up for in stores or online? Yeah, probably. The story itself is good, the art is beautiful enough that it can withstand some wonky animation and the voice acting is generally good enough to do the same. That one or two voices out of a cast of dozens might be less than great can be distracting, but no more so than a single bad performance in any movie.

Plus, John Romita, Jr.'s behind-the-scenes interview, while not too in-depth, is pretty cool. It's hard to say no to spending less than $15 to get a Neil Gaiman story and John Romita, Jr. doing the bonus features.