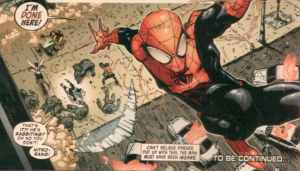 When the identity of The Superior Spider-Man is laid out for all to see in two weeks, it won't be Peter Parker. While Marvel has strongly hinted that Peter Parker would not be under the Spider-Man mask in the upcoming series The Superior Spider-Man, not all fans have been convinced. The character, currently celebrating his fiftieth year, will still be alive and appearing in Alpha, but according to series editor Steven Wacker, Marvel expects that Peter Parker's fans will eventually fade away and forget about him as the new series lead takes over. The sheer ridiculousness of that comment can't be lost on Wacker, the context of a comics community where high-profile fanboys are still complaining about Emerald Twilight, twenty years and two massive retcons later. In any event, a leaked image claiming to be the final page of Superior Spider-Man #1 brings fans a Spider-Man who's definitely not Peter Parker. How do we know? Because he narrates to himself that, essentially, he wants to do things differently from the way Peter did. "Can't believe Parker put up with this," Spider-Man narrates. "The man must have been insane." Now, there are a few possibilities here. It could be a fake, especially since these pages or something very much like them were shown onscreen at New York Comic Con in October--but if they are, they're impressively convincing. They also could have been impressively faked by Marvel in order to throw people off the scene and sow the seeds of confusion, especially after all of Dan Slott's begging, demanding and posturing proved ineffective against Amazing Spider-Man #698 being spoiled online. If they're on the level, though? Looks like we've got the biggest status quo change of Marvel NOW!.