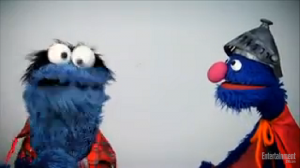 Some of this year's biggest movies, including Marvel's The Avengers and The Hunger Games, were re-enacted/parodied by Sesame Street's Cookie Monster and Grover, who paid a visit to Entertainment Weekly earlier today in support of the show's just-begun new season. Elmo, who joined the pair last year when they created a similar video making fun of popular television shows (Dr. Who makes an appearance in this year's installment, so there's some of that, too), was unavailable for this sketch, presumably spread thin with the much-hyped debut of Elmo: The Musical this week. It's that segment--designed to replace the popular Elmo's World sketches--that inspired this little musical montage, which also gently poked fun at The Newsroom. "So if you were one of the many viewers who thought Aaron Sorkin's biggest mistake was not saddling his newsman protagonist with a crippling cookie addiction," EW jokes, "then this video is for you!" While I personally enjoy the cognitive dissonance of watching Cookie Monster scream "Me love Hunger Games," the undeniable high point of the bit has to be learning the tragic secret of the Edible Hulk. Yeah, it's pretty much exactly what you think it is. And it's hilarious. Michael Lapinski, artist and co-creator on Archaia's Feeding Ground, is the art director for Magnetic Dreams, the animation house that's used not only for Elmo: The Musical but also for Marvel's motion comics. We spoke with Lapinski earlier in the week and will run that conversation tomorrow. You can check out last year's visit to EW below.