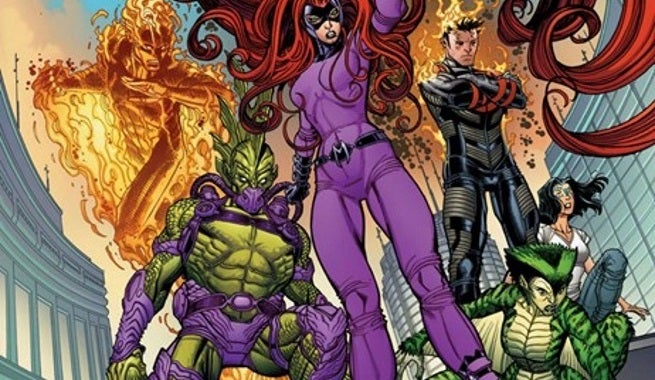 With the Fantastic Four out of commission, it looks like Johnny Storm has found a new super-powered family to join. The Human Torch is joining up with the Inhumans in the Free Comic Book Day issue of The Uncanny Inhumans.

Marvel has been teasing the series' lineup, previously revealing the Inhuman queen Medusa and "Nuhumans" Inferno and Naja. In addition to the Human Torch, they are also joined by another Nuhuman, Iso, and another member of Medusa's Inhuman royal family, the aquatic Triton.

While Johnny Storm is not an Inhuman – and the Wired article revealing the cover does nothing to suggest that his origin will be altered during Secret Wars – he does have a longstanding romantic relationship with a member of the royal family, Medusa's sister Crystal, that could help to explain why he's joining up with their cause.

Notably absent from the cover is the Inhuman king Black Bolt, whose return as teased heavily for Uncanny Inhumans #0. We'll have to wait and see where Black Bolt ends up when the series kicks off.

Uncanny Inhumans, written by Charles Soule (Inhuman) and drawn by Steve McNiven (Civil War), will be released on Free Comic Book Day, May 2.