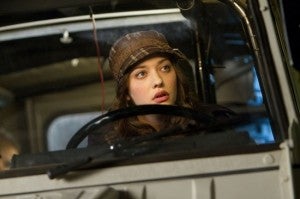 During an interview in promotion of her CBS sitcom Two Broke Girls, Thor: The Dark World co-star Kat Dennings assured Metro UK that the upcoming sequel will feel right for the fans eager to see it. "I can't tell you a lot. I don't know exactly what they're releasing, so I'm not sure what I'm allowed to say. And if I say the wrong thing, I'm going to probably be assassinated," joked Dennings. "The experience has been fantastic. I think the atmosphere of this movie is going to feel a lot more authentic for fans. I think that will be really cool." Of course, "authentic" can mean a couple of things, both of which have been touched on in previous interviews. The film features Thor squaring off against Malekith The Accursed, a character created for the comics and so the first major challenge for the thunder god that isn't also derived from Norse mythology. There's also the fact that a number of the actors have spoken about shooting on location as opposed to in-studio and the importance of practical effects to director Alan Taylor's vision for the series. His experience on Game of Thrones comes into play there, and those closest to the production have said that it gives the film a feeling of gritty authenticity that's been somewhat absent in other big-budget blockbusters of late. Both The Amazing Spider-Man and The Dark Knight Rises opted for practical effects whenever possible and, while neither of them garnered the universal acclaim that Marvel's The Avengers did, if there's one area where they raked in a lot of praise it was in the look of their films, including the effects and stunt work. Thor: The Dark World hits theaters on November 8.

Thor: The Dark World's Dennings: Sequel is "More Authentic For the Fans"