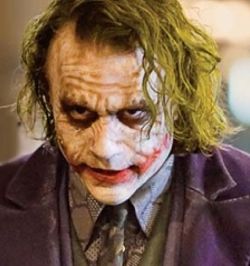 In last year's blockbuster The Dark Knight, the Guardian of Gotham spent most of the film trying to answer the question of how to deal with the Joker. In past weeks, Heath Ledger's portrayal of the Clown Prince of Crime had Oscar officials scrambling with a decision of their own regarding how best to determine who has a legal right to accept his award, should the actor win Best Supporting Actor posthumously.

According to the by-laws of the Academy of Motion Picture Arts and Sciences, "tradition calls for a posthumous statuette to go to the spouse, or, if there is no living spouse, to the oldest child." Complicating matters is the fact that Ledger was not legally married to Michelle Williams, actress and mother of his only child, Matilda. On Wednesday, representatives of the Academy announced that they had finally reached a verdict, deciding that the award should go to Ledger's daughter.

However, there's a huge glitch that caused Oscar officials to re-read their rulebooks. Matilda Ledger is only 3 years old and thus legally not of age to sign what is known as a 'winner's agreement.'

In an attempt to prevent Oscars from being sold on auction blocks as frequently as a Honus Wagner T-206 baseball card, the Academy established the winner's agreement, under which the winner of an Oscar promises first to sell it back to the Academy for the sum of $1. Under these rules, it is likely that Matilda's mother will sign the agreement and that the child will be allowed to keep the award until she turns 18. Then Matilda Ledger will be asked to sign a new agreement in order to become the Oscar's lawful owner. If she refuses, the Academy will revert back as the legal owners of Heath Ledger's award.

All of this rests on whether Ledger will win the Academy Award, and having this flurry of activity over the legality of who will accept the award if he wins may be a very good sign that he will. This then brings up another, less complicated question involving the Ledger case: who will accept the Oscar during the televised event? Usually a close relative or an artist close to the nominee accepts the award. While the identity of Ledger's potential representative has not been officially disclosed, reports out of Australia say that several members of Ledger's family are on the way to the U.S. and will accept if Ledger wins.