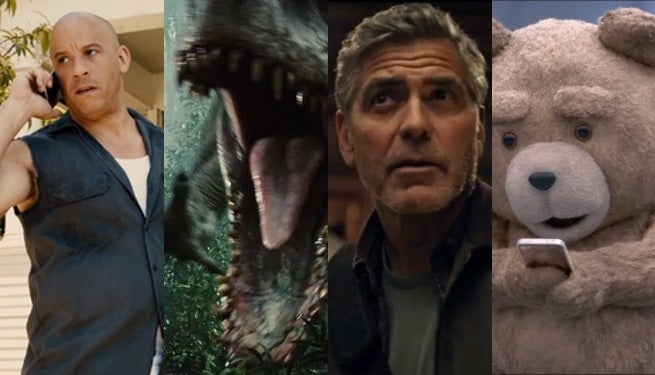 The Super Bowl is akin to a holiday for many sports fans, but it's also become a key marketing moment for Hollywood's summer blockbusters. Several trailers were released during tonight's big game, and we've collected them all here.

Below you'll find new trailers for Jurassic World, Tomorrowland, and Furious 7 and more. Let us know which movies you're most excited for in the comments below.

Steven Spielberg returns to executive produce the long-awaited next installment of his groundbreaking Jurassic Park series, Jurassic World. Colin Trevorrow directs the epic action-adventure from a screenplay he wrote with Derek Connolly. Frank Marshall and Patrick Crowley join the team as producers.

Jurassic World will be released in 3D by Universal Pictures on June 12, 2015.

The story of Universal Pictures and Illumination Entertainment's Minions begins at the dawn of time. Starting as single-celled yellow organisms, Minions evolve through the ages, perpetually serving the most despicable of masters. After accidentally killing off so many of them—from T. rex to Napoleon—the Minions find themselves without a master to serve and fall into a deep depression.

The trio embarks upon an adventure that ultimately leads them to their next potential master, Scarlet Overkill (Academy Award® winner Sandra Bullock), the world's first-ever female super-villain. They travel from frigid Antarctica to 1960s New York City, ending in mod London, where they must face their biggest challenge to date: saving all of Minionkind...from annihilation.

Featuring a soundtrack of hit music from the '60s that still permeates our culture today, Minions is produced by Illumination's Chris Meledandri and Janet Healy, and is directed by Pierre Coffin and Kyle Balda. Brian Lynch has written the screenplay for the 3D-CG comedy adventure, and Chris Renaud serves as executive producer of the film.

The SpongeBob Movie: Sponge Out Of Water

SpongeBob: Sponge Out of Water is in theaters February 6th.

Check out the new Insurgent Trailer, "She is the One," airing this Sunday during the Super Bowl Pregame Show. Insurgent stars Shailene Woodley, Theo James, and Kate Winslet. Catch it in theaters March 20th!

A 18th century adventure story centered on young Thomas, who is apprenticed to the local Spook to learn to fight evil spirits. His first great challenge comes when the powerful Mother Malkin escapes her confinement while the Spook is away.

From Disney comes two-time Oscar® winner Brad Bird's "Tomorrowland," a riveting mystery adventure starring Academy Award® winner George Clooney. Bound by a shared destiny, former boy-genius Frank (Clooney), jaded by disillusionment, and Casey (Britt Robertson), a bright, optimistic teen bursting with scientific curiosity, embark on a danger-filled mission to unearth the secrets of an enigmatic place somewhere in time and space known only as "Tomorrowland." What they must do there changes the world—and them—forever.

Featuring a screenplay by "Lost" writer and co-creator Damon Lindelof and Brad Bird, from a story by Lindelof & Bird & Jeff Jensen, "Tomorrowland" promises to take audiences on a thrill ride of nonstop adventures through new dimensions that have only been dreamed of.

A hard-working small business owner (Vince Vaughn) and his two associates (Tom Wilkinson, Dave Franco) travel to Europe to close the most important deal of their lives. But what began as a routine business trip goes off the rails in every imaginable – and unimaginable – way, including unplanned stops at a massive sex fetish event and a global economic summit.

Fifty Shades of Grey is the hotly anticipated film adaptation of the bestselling book that has become a global phenomenon. Since its release, the "Fifty Shades" trilogy has been translated into 51 languages worldwide and sold more than 100 million copies in e-book and print—making it one of the biggest and fastest-selling book series ever.

Stepping into the roles of Christian Grey and Anastasia Steele, who have become iconic to millions of readers, are Jamie Dornan and Dakota Johnson.

Fifty Shades of Grey is directed by Sam Taylor-Johnson and produced by Michael De Luca and Dana Brunetti alongside E L James, the creator of the series. The screenplay for the film is by Kelly Marcel.

All Super Bowl Movie Trailers In One Spot