Earlier today we posted the first part of our interview with Dave Schaub, Director of Animation at Sony Pictures Imageworks, whose latest film is The Amazing Spider-Man 2. In the first part of the interview, Schaub told us what it meant to try to get the physics right in a superhero movie. In the second part, he discusses how the villains of the film - Electro, Rhino, and the Green Goblin - transformed over the course of the design process for the film. 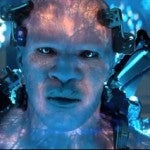 "Electro was probably the most time consuming as far as getting the character realized," Schaub said. "The basis for all of the close-up work is real photography of Jamie Foxx.  He's wearing prosthetics on his face, so all of the imperfections that result through a day of shooting needs to be digitally cleaned up as the first step.  From there, a specialized team of animators track his performance including the soft tissue of his face so that effects applied downstream register precisely to his performance. There's an interior structure to his face, and vein detail on the surface needs to slide over the interior structure in a natural and organic way. "For the broader performances on set, Jamie Foxx was suspended on wires and it kind of looked that way in the photography.  It served as a great starting point to define the intent of his performance, but Marc wanted to make Electro look like he was floating under his own powers.  With that, the animation team embarked on another process of exploration.  We had some great animators pitching a lot of great ideas, and Marc responded well to what he saw.  In the final result, Electro teleports from one location to another through a method that we called "e-ghosting."  He enters a charge of electricity and travels the length of the bolt and emerges from the other side in a way that feels somewhat organic.  There are also moments where he materializes mid-way through the e-ghosting effect.  It's almost subliminal in some cases, but it gives you the sense that there is a human element in there - a personality of sorts embodied in the e-ghost trails.   Animators were able to control the shape, timing and branching of the bolts, giving the bolts themselves a character.  These parameters were passed downstream to the effects team where more creative layers were added.  It was a very collaborative process between all the different departments." 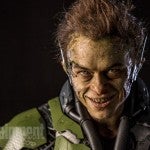 Schaub said that designs for the Green Goblin also began with practical effects. "Green Goblin is another case of practical prosthetics on the first level," he explained "We have Harry Osborn who, through a genetic mutation, has been transformed into the goblin.  Actor Dane Dehaan wore a practical battlesuit for the close-ups, and rode on a mechanical rig driven by hydraulics.  An animated version of the glider was added later by the team at Imageworks, and tracked to the performance in the photography. "That was the case for the close ups only.  For the wider shots, when he actually has to fly and do the action sequences, the goblin and glider were completely digital and animators explored different ways for the Goblin to manipulate the glider.  We presented Marc with a collection of different ideas, and he really liked the idea of manipulating the glider through weight-shifting like a slalom skier.  This meant separating each side of the glider for independent control of each foot.  Rather than building a glider with predefined hinges and gimbals, we figured out how it was going to move first, and let that inform the final engineering of the mechanism. This is a case where function informed the design.  The original intent was to use our digital goblin only in the distant-wide shots, but as we started bringing him closer and closer to the camera Marc felt it held up well enough to be qualified as a full-on digital character. This meant that he could go in long after practical photography was complete and add additional performance shots wherever he felt it was needed, knowing that you would not be able to tell the difference between the practical photography and the digital version of the same." 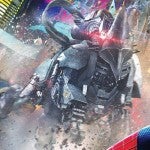 Out of all the villains, Rhino may have transformed the most during the design process. "Speaking of function informing design," Schaub continued, "the Rhino also evolved well into the process of animation. The earliest artwork defined how tall the character was going to be, but that's about all we knew at that early stage.  There were lots of great design ideas floating around, but nothing approved as of yet.  With Rhino's height defined, the special effects team built a practical rig for actor Paul Giamatti on set.  This elevated the actor to the correct height to establish eye-lines and assure that appropriate shadows were being cast on the actor's face and upper body to match the lighting environment on the day of the shoot.  His head would ultimately be removed digitally, and tracked back into the animated version of the suit once the final design was approved." In addition, the Rhino had some pretty posed some pretty unique design challenges. "Another creative and technical challenge is that the Rhino had to function as both a biped and quadruped," Schaub said. " That means standing on two legs, as well as all four's and be able to transition between the two states in a natural way.  Not only was it a tricky engineering challenge, but it was the movement studies that defined the final configuration of the design.  He was originally built with the proportions of a rhinoceros, but he looked pretty silly when standing as a biped on those stubby little rhino legs.  As a result, the legs were beefed up to make him more imposing in that pose.  Only through the process of animating do we get an impression of how the final design should be configured.  So there's a lot of back-and-forth between departments to flesh out something that works on all levels.  Marc's original idea was to make Rhino a little clunky and sort of hobbled together with spare parts.  As a result, our early movement tests reflected a rickety style of movement that had a comedic flare to it. Over time, the Rhino became a more formidable and imposing character for the final standoff with Spider-Man.  Again, all of this comes about through a process of discovery, and it's always fun to give these different ideas a try.  You never know where those exploration paths will lead you." Electro, the Rhino, and the Green Goblin can all be seen in The Amazing Spider-Man 2, coming to theaters May 2.