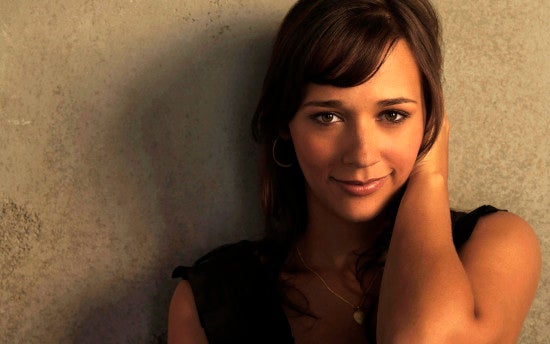 With Parks & Recreation reportedly coming to an end soon and star Chris Pratt appearing in Guardians of the Galaxy, could his onscreen ex-girlfriend Rashida Jones also be headed to the Marvel Cinematic Universe once the series is over? That's what Superhero Movies News is claiming, saying that the actress best known for her roles in NBC sitcoms is now a favorite to star as Janet Van Dyne in Ant-Man. The character, according to their source, will be introduced as a love interest for the lead character and won't actually get her own powers and costume (as The Wasp) in the film. They do speculate, though, that there might be implications of things to come in that department. The site claims they wouldn't believe it themselves if their anonymous source weren't the same one who told them months ago that Paul Rudd was director Edgar Wright's pick for Ant-Man.  Now, Rudd isn't Joseph Gordon-Levitt. There isn't anybody trying to attach his name to anything that moves, and when this rumor came up months ago--first reported by ComicBook.com--it was easy enough for many to dismiss as unlikely.

So SMN didn't run that story when it was fresh, they claim, but months now that there's the veneer of credibility of a Variety story behind that rumor, it became hard to ignore this particular source. File this one under "very, very tentative." While SMN is right that new scoop from a proven source is hard to pass up, it's equally true that Jones's onscreen history with Rudd--they've starred in I Love You Man and Our Idiot Brother together--the odds go way up that this is somebody throwing darts at the board, a la the aforementioned Joseph Gordon-Levitt rumors. And anytime major casting scoop lands in the lap of a smaller site instead of one of the major trades, it's difficult to take it too seriously...but this is at least as credible as claims made earlier this week (and widely reported) that Michael B. Jordan is "officially" on board for Fantastic Four. That said, Jones is a known comic book fan and co-creator of a comic book series--Oni's Frenemy of the State--so it's not as though she'd be out of place in the Marvel Cinematic Universe if this were to come to pass.