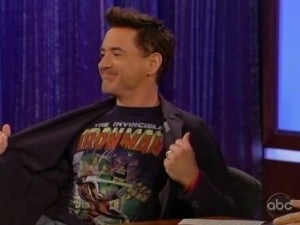 Robert Downey, Jr. has signed a new contract with Marvel Studios to return for Avengers 2 and 3, ending suspense as to Iron Man's status for the sequel but seemingly casting doubt on the future of the character's solo franchise. The sequel is slated to begin production in March 2014 and open in theaters May 1, 2015, reports The Hollywood Reporter, who broke the Downey news. Marvel's The Avengers director Joss Whedon, who is returning for at least the first of the two sequels, recently said that he couldn't imagine going forward with the film if Downey didn't sign on board. Downey was also rumored to be leveraging his bargaining power with the studio to get better deals for his co-stars. All along, rumors were that Marvel wanted at least one more solo film out of Downey, while Downey was hesitant to commit to another Iron Man. If nothing changes, it appears as though not only will Downey not return for Iron Man 4, but that his presence as Tony Stark/Iron Man in the third Avengers film implies that there won't be anyone taking the gig over from him during Phase III, suggesting no more solo Iron Man films until about 2018. This is great news for Marvel; last year, The Avengers was the top-grossing film of the year and became the third-highest-grossing movie of all time. Iron Man 3 looks to be on pace to win the box office crown in 2013, and is currently number five on the all-time list. While Shane Black left the character in a pretty good place to wrap up, most fans had been clamoring for Downey to return, even if only for more Avengers.