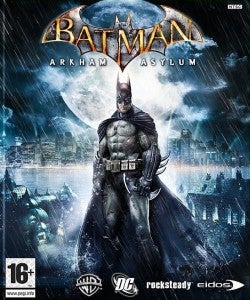 Zipping into stores near you on August 25th is the buzzworthy video game Batman: Arkham Asylum. Playable on the Playstation 3, XBox 360 and Microsoft Windows, the game has received some good early reviews, even though not that many are published yet, and many are praising the new features of the game, such as Batman being able to operate in "predatory" mode, the open exploration available to the player as they roam all over Arkham and the inclusion of villains such as Mr. Zsasz and heroes like Oracle. While this is certainly not the first, and probably not the last, Batman video game to hit our screens, it's measuring up to be one of the best. With that, it's time to look back at some other Batman games from over the years, measuring their playability, fun level and overall "battiness" from one to four batarangs!

Batman: The Rise of Sin Tzu (2003) You can't blame them for trying. So much was put into this game to introduce a new character, villain Sin Tzu, into the regular DC universe that it was almost too much. The game play is typical "hero versus groups of villains along with missions" fare, but the ability to play as Batman, Robin, Nightwing or Batgirl is certainly a fun twist. It's also a good idea to have each character have different strengths, which makes choosing who to play as fun. There's not enough time given to the missions in the game, such as freeing hostages within a certain amount of time, and the battles with some of the minor bosses such as Clayface and Scarecrow feel like a carnival game rather than a boss battle. The game was not a favorite with fans or critics, and, well, you see how well Sin Tzu moved into the DCU Batarang count: 2 1/2

The Adventures of Batman and Robin (1994) Considered an extension of the very popular Batman: The Animated Series, this game, made for the SNES and Sega consoles, took the player on a dizzying tour of the series. Two main treats to this game are the impressive roster of villains present in the game, such as Joker, Riddler, Poison Ivy, and Scarecrow, and the use of the voice talent from the animated series. There are plenty of cool gameplay options and gadgets to use in the game, but one drawback is the lack of saves available for the hardest level of the game. What's also interesting is the vast difference between the SNES and the Sega versions. Despite that, and an oddly used Robin, the game is a fun and diverse foray into the animated universe of the Caped Crusader. Batarang count: 3 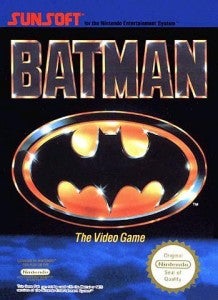 Batman (1989) Probably one of the better-designed games for the original Nintendo (NES), Batman managed to capture the noir feel of the Tim Burton helmed film of the same name. The game, a side-scrolling adventure, has Batman taking on various bosses and villains such as Deadshot, Firefly and eventually the Joker, in the cathedral from the film. It's always a good sign when you celebrate triumphantly when defeating the game, and that's definitely the case here. The villains prove a formidable match in this game, and Batman's wall grab move is a neat trick for a game from this era. The cut scenes are also a nice touch, and the music captures the feel of its film origin nicely. It's arguably one of the best Batman adaptations made. Batarang count: 4

Batman: Dark Tomorrow (2003) I can remember playing this one on Game Cube a couple of years ago, after fishing it out of a used game bin for about $4.99, and feeling that I had played this game before. I suppose that's because I had, in many forms and platforms before. Same old, same old here, as Batman fights through a sea of villains to expose a nasty plot of destruction. This wouldn't be so bad if the controlling of the character were better, as well as the camera, which had players bumping into things and falling to their death during rooftop swings. Ugh. This game is very nice to look at and sports some cool imagery, but for the time it was released there's no reason to have a camera and controlling configuration so frustrating and difficult to master. What really sucks is this game wasn't an adaptation of any movie or show. Batarang count: 1

Batman Forever (1996) It's more or less a toss up as to which was more irritating, the film Batman Forever or this video game version. Riding the popularity of Mortal Kombat, the game has the misfortune of not having the fatalities, minimal levels or lack of plot reliance that made MK such a successful franchise, despite borrowing heavily from the use of visual representations of characters for the game. There are some very kooky scenes in Batman Forever, especially with as many attacks as possible such as low/high punches, sweeps, etc. Again, Mortal Kombat this is not, although it aspires to be. While the graphics are pretty good, the gameplay is pretty frustrating, overall a bad idea. Batarang count: 1 1/2

Lego Batman: The Video Game (2008) Going to another game not based on a story adaptation, Lego Batman was the next game in a series of games founded in Lego figures. The gameplay takes you all over Gotham City, by rooftop, boat, plane and on foot. The fun of the game is in the unlockable features, such as getting to play levels as villains and the chance to go back through levels to retrieve special items as different characters is also a great feature. The game controls are a breeze to figure out and the whole game has an air of fun around it, all the while allowing players to explore Gotham City in a new way, and there are endless little gadgets and vehicles to build in the game. A fun feature are the special powers of the villains, even Killer Moth! Batarang count: 4 While the most important jury is out on Batman: Arkham Asylum (the players!), it's safe to say that the game will join the rich pantheon of video game versions of the Batman mythos that already exists. Where will the game fall on your own personal scale?

Battle for the Console: Some Good (and not so Good) Batman Video Games