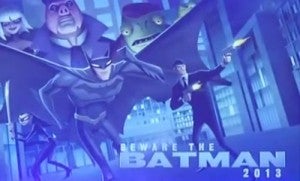 , the upcoming animated Batman series scheduled to join the DC Nation block on Cartoon Network, will be toned down, and the role of weapons downplayed, as a result of an increased sensitivity toward violent programming at Warner Brothers in the wake of the Aurora, Colorado shooting spree at a screening of The Dark Knight Rises last week. The call was made by WB Animation executive VP Sam Register, who reportedly was not pressured by anyone at Time Warner corporate. Time Warner also owns Cartoon Network, who will air the series. Variety is reporting that "An unspecified number of alterations were made to some designs and situations on the series to minimize the amount of weapon imagery deemed too realistic." How exactly they intend to downplay violence when Batman's sidekick Robin is being replaced by the sword-wielding Katana is likely a concern for Warner, who declined comment on the story which was reportedly confirmed by "multiple sources." The series, which is CGI-animated, will be a decidedly different look and feel for Batman than TV fans are used to; a gun-wielding Alfred (contrary to popular belief, this is not entirely unheard-of) is featured on the promotional image at left, along with villains like Mister Toad and Professor Pig. Anarky, a sometimes-political villain mostly associated with Robin, is also referenced in the Variety story. The article points out that Warner Animation is also overseeing a direct-to-video adaptation of Frank Miller's seminal Batman story The Dark Knight Returns. A two-part, three-hour animated event split over a pair of direct-to DVD and video-on-demand releases starting in November, the story has been in headlines lately because Miller's graphic novel features a sequence that includes a theater shooting.