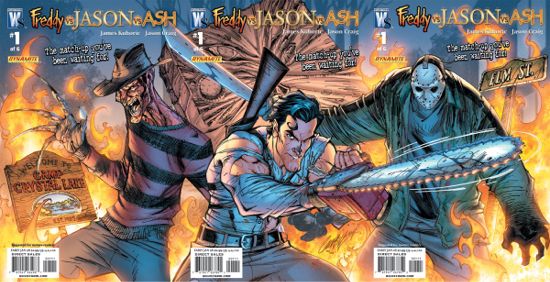 We've already covered what Bruce Campbell had to say about an Army Of Darkness sequel and a show he is developing with USA, but what about a movie from the past that never got made. At one time, New Line Cinema was considering making a Freddy Vs. Jason Vs. Ash movie, but it never came to be. The film treatment eventually wound up being adapted into a comic book limited series. Last month, Comicbook.com reported on how Robert Englund, who played Freddy Krueger, said the film came very close to actually getting made. As to why the movie didn't get made, Englund said he thought the issue was Sam [Raimi] wanted Ash to win. At Wizard World Nashville Comic Con, we got to hear Bruce Campbell's side of why Freddy Vs. Jason Vs. Ash didn't happen. He also seemed to indicate the issue was New Line Cinema wasn't comfortable with Ash winning. "We had that conversation with New Line Cinema," said Campbell. "And it went something like this, Breep [mimicking telephone ringing] Oh. look it's New Line Cinema. Hello. 'Hi, this is New Line Cinema. We'd like to make Ash Vs. Jason Vs. Freddy.' Great idea, then Ash can kill Jason and Freddy once and for all. Hello? That was it. That was the conversation." Campbell continued, "How you gonna kill them? You can't kill them. That's why those movies are so stupid. You can grind Jason's face off with a propeller, with a boat. I've seen it with my own two eyes. I forget what number that was, which version of which f***ing remake, sequel bull****. You see his face ground up. It's the end of the movie. Then, boomp his eyes open, end credits roll." "That's a rip-off mister. So you don't want that. You don't want Ash to sort of get in a fistfight. We could only control our character too. We had no control over what the other characters did or said," added Campbell. "And then you've got to split those pesky profits up. Who wants to do that? Not New Line Cinema."

Bruce Campbell On Why Freddy Vs. Jason Vs. Ash Didn't Happen