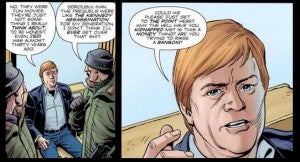 Mark Millar announced over the weekend that Joe Carnahan, the Smokin' Aces director most recently in talks to take over the Daredevil franchise before Fox gave up on the whole idea, will helm a film adaptation of his comic book series Nemesis. Based on a script from Carnahan and his brother, the film is still in the early stages, but that's a huge step forward from where it's been for the last year or so, as it seemed stranded in development hell. "Shot straight from a wedding in Manchester last week to the City of Angels and plunged straight into some studio biz on the Nemesis movie," wrote Millar on his Millarworld Forums. "Mighty Joe Carnahan is directing (from a script by he and his brother Matthew), but this much you already know. Fox wanted us to get in the same room for the first time and really hash this out, which was exciting. Joe has a really brilliant take on this and Matt and he are going to take things from here so I'm really happy. Absolutely no casting has been done formally although you can google the MTV interview from last January where he and Sir Liam Neeson are chatting about it. More news as it happens." Given that it's Fox that's distributing the film, one has to wonder whether his Daredevil sizzle reel may have helped him finalize the gig and whether elements of that film may be repurposed for Nemesis, although obviously if he's already been working on a script that might be a bit naive. Millar, who developed the comic that provided the basis for the hit film Wanted, also reported that his film The Secret Service, being developed with X-Men: First Class writer/director Matthew Vaughn based on the Millar/Dave Gibbons comic, will go into production following X-Men: Days of Future Past. [UPDATE Aug. 20, 10:45 a.m. EST] The film was to be produced by Scott Free Productions, home of Tony and Ridley Scott, and at one point Tony Scott, who passed away late last night, was set to take the project on as director. He had moved on before Millar landed on Carnahan, but Carnahan had kind words for his would-be predecessor. "Tony Scott as a friend and a mentor was irreplaceable. Tone, wherever you are, I love you man. RIP," Carnahan said on Twitter. Said Millar of Scott, "In the short time we were planning our thing I found him incredibly funny and polite, courteous to a fault. I was a nobody writer from a world he really barely knew (he grew up a good ten years before Marvel comics really seized the public imagination), but he loved the anarchy of comics and my co-creator and artist Steve McNiven really appealed to him because he reminded him of the Heavy Metal work he dug, the Moebius and Rank Xerox strips he'd gotten into. I remember getting one of his cyber post-cards with a little drawing saying our scheduled call would be 30 mins late as he had a meeting and I think this pretty much sums him up: Polite and charming to a guy he barely knew and always keeping a personal touch in an industry where that's often the first thing to go." "Matthew Vaughn and I conceived The Secret Service a year or two back and plan to make into a movie once he's wrapped the First Class sequel next year," said Millar, who discussed it in the context of a lunch with Mark Hamill  who may play himself in the film (he was killed in the comic). You can check out an eight-page preview of The Secret Service comic here.