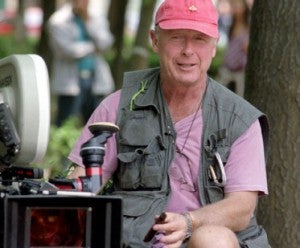 Famed filmmaker Tony Scott--director of Top Gun, Enemy of the State and many, many more, died today after jumping off the Vincent Thomas Bridge in Los Angeles. Scott--the brother of Blade Runner and Prometheus director Ridley Scott--reportedly left a suicide note in his car, which was parked in one of the bridge's eastbound lanes. The note was reportedly discovered by the U.S. Coast Guard, according to TMZ. His suicide apparently happened shortly after noon Pacific time, and his body was discovered by the Coast Guard using sonar tools four hours or so later, but it's just now coming out that the body recovered was Scott's. [UPDATE Aug. 20, 10:45 a.m. EST] CNN later clarified some of these points, saying that it was in fact the Los Angeles Port Police who found the body, not the Coast Guard, and that a representative for Scott Free Productions has confirmed the death and asked for privacy on the family's behalf. The car also reportedly did not contain the suicide note, but contact information verifying Scott's identity; the suicide note was apparently discovered in his office. "RIP Tony Scott," tweeted prospective Guardians of the Galaxy director James Gunn within moments of the news breaking. "Damn. He was a huge inspiration. Very sad." Rick Remender, the incoming writer of Marvel NOW!'s Uncanny Avengers, tweeted, "True Romance will always be one of my top 5 favorite films. RIP Tony Scott and thank you." Scott was supposed to direct Narco Sub for 20th Century Fox, a spec script from David Guggenheim that was bought up back in November of last year. He was also reportedly in production on Top Gun 2. [UPDATE Aug. 20, 10:35 a.m. EST] Scott was at one point attached to produce and possibly direct a film adaptation of Mark Millar's Nemesis, a job just handed over to Joe Carnahan (in an unrelated coincidence--that announcement came first). "Tony Scott as a friend and a mentor was irreplaceable. Tone, wherever you are, I love you man. RIP," Carnahan said on Twitter. Millar made a statement on the Millarworld Forums this morning, which you can read below:

I'm just awake this morning and blinking at the screen, reading details about Tony's suicide. I got back from LA a couple of days ago where I spent a big chunk of my time with Tony's producer as Scott Free (the production company he formed with his brother Ridley) bought the rights to the adaptation of one of my books and so he's a guy who's been in my thoughts a lot over the past eighteen months. In the brief period we got to know each other, where he was talking about directing this adaptation himself, I found an instant rapport. He hated email and instead used to communicate with funny hand-written notes which his assistant would scan and mail to me and he'd tend to communicate this way or by postcard if we didn't speak by phone. In the short time we were planning our thing I found him incredibly funny and polite, courteous to a fault. I was a nobody writer from a world he really barely knew (he grew up a good ten years before Marvel comics really seized the public imagination), but he loved the anarchy of comics and my co-creator and artist Steve McNiven really appealed to him because he reminded him of the Heavy Metal work he dug, the Moebius and Rank Xerox strips he'd gotten into. I remember getting one of his cyber post-cards with a little drawing saying our scheduled call would be 30 mins late as he had a meeting and I think this pretty much sums him up: Polite and charming to a guy he barely knew and always keeping a personal touch in an industry where that's often the first thing to go. As a craftsman, I thought he had one of the most eclectic and interesting resumes in the biz, True Romance as different from Crimson Tide as you can get, The Hunger and The Last Boy Scout two of my absolute favourite movies. It bugged me when he was criticised for being all flash and no substance. It was short-hand for the lazy reviewer, the critic who missed what he brought to the screen and the breadth of what he was capable of. He was a nice man and a talented man and it's such a sad end for someone I got to genuinely like in the short period where our world's touched, but like everyone here I'll mainly miss him as a brilliant and unique film-maker.