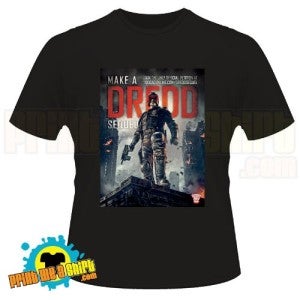 Next week when Dredd: Underbelly, an official sequel to the film Dredd 3D, comes to comics, the fans behind the Make a Dredd Sequel campaign will come together to mark the occasion by trying to move the first film back up the sales charts. "The response to the petition has been just incredible and the endorsement of the owners of Judge Dredd, 2000 AD and Rebellion, has seen the numbers surpass everyone's expectations," they said in a statement today. "We're asking everyone who's signed the petition to come together next Wednesday and drive Dredd back up the charts - if everyone who's signed the petition bought an extra DVD or Blu-Ray (either for themselves or as a present for a friend) or rented/bought it on iTunes and Netflix it will send the loudest signal yet that WE WANT MORE DREDD!" To encourage fans, they've created a t-shirt for the Make a Dredd Sequel campaign that supporters can buy for £15.00 on Amazon's UK site.