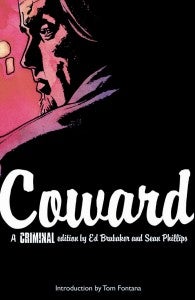 Eisner winner Ed Brubaker confirmed today that he's scripting a film adaptation of "Coward," the first arc of his and Sean Phillips's Criminal series of creator-owned comics for Marvel's Icon line. The deal between Brubaker, producer Jamie Patricof and Hunting Lane Films was first reported by Variety. Criminal is a sustained effort on the part of Brubaker and Phillips which flexes a lot of the same mystery/noir muscles as Brubaker's fantastic graphic novels Scene of the Crime: A Little Piece of Goodnight and Incognito. The latter was recently optioned by Fox for a film adaptation as well. Leo, the central character of "Coward", will recur in an upcoming Criminal story arc, according to the article. Brubaker told Variety that Hunting Lane has right of first refusal to adapt that story. David Slade, who has directed genre fare like 30 Days of Night and Twilight: Eclipse, is attached to direct the film. While neither of those necessarily screams that he'd be suited to the property, his first feature was the fantastic Hard Candy, a taut and twisted psychological thriller featuring a pre-Juno Ellen Page and a pre-Watchmen Patrick Wilson. "'Coward' was just a great modern story," Slade said. "It harkens back to an era of crime stories where there's really a gritty reality to it, but there's a kind of underworld haze of noir. It's not like we have to reinvent the material, to figure it out, because it already works." Brubaker has been writing the screenplay with Slade at his side, according to Variety. Whether working on Criminal will affect the status of Slade's announced-but-stalled reboot of the Daredevil franchise remains to be seen. Brubaker, apparently, has something else up his sleeve, too. "Next week's news will really please a lot of you, too," Brubaker said on Twitter. "It's like non-stop Brubaker announcements. And this one is from Marvel."