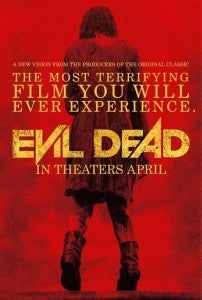 The Evil Dead remake got off to a strong start at the box office on Friday, bringing in $11.5 million. By most predictions, Evil Dead should easily take the #1 spot at the weekend box office in the U.S. If you're planning to go see Evil Dead this weekend, we wanted to advise everyone not to get up and leave when the credits start rolling. While people have come to expect after the credits scenes with Marvel Studios, Evil Dead is actually a Sony film, so many people probably weren't necessarily expecting an after the credits scene. Now, if you've already seen the Evil Dead and unknowingly left before the credits finished rolling or if you just can't wait to know what the scene is, we're going to provide a spoiler and tell you what the scene is. If you don't want to know then stop reading now, because it's much better to watch it live than just read about it. After the credits in Evil Dead, the screen goes to black for just a couple seconds. Then, a side profile view of the face of Bruce Campbell as Ashley 'Ash' J. Williams slowly becomes visible in the darkness. Ash is looking down at first, and he slowly starts lifting his head up in perfect synchronization with the background music crescendo. Then, suddenly the background music stops, and Ash utters the single word, "Groovy." Then, Ash quick turns his head to look directly at the camera (and out at the audience) in a menacing way. As Ash stares at the audience, the background music returns for one final high note. Then, the scene fades to black. The entire Evil Dead after the credits scene only lasts about seven seconds, but it's totally worth the wait to stick around through the credits.

Evil Dead After The Credits Scene