John Ottman, the editor and composer who has worked with director Bryan Singer since the '90s and developed films like The Usual Suspects and X-Men with the filmmaker, came back for this year's time-hopping sequel X-Men: Days of Future Past -- and it's his plan to come back again in two years for X-Men: Apocalypse, the sequel teased at the end of the newly-released film. That's because, according to Ottman, Days of Future Past director Singer will return for X-Men: Apocalypse, which is set for theatrical release on May 27, 2016. This weekend, X-Men: Apocalypse and Fantastic Four writer Simon Kinberg, who took Singer's place during press for the movie, said that the studio's plan at present was to bring Singer back as the director -- and with Ottman seemingly confirming that it's Singer's plan, it seems likely a go, since the movie is expected to go into production fairly soon. 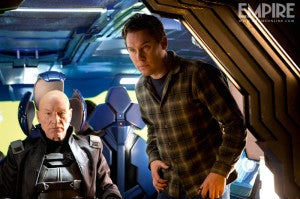 Singer, who directed X-Men and X2: X-Men United before leaving to do Superman Returns at Warner Bros., has been a producer on the films since their earliest days but came back to direct for the first time in more than a decade for Days of Future Past. With expectations riding high for the film back in April, conventional wisdom was that Singer would be back -- but allegations of sexual abuse made against the director threatened to derail those plans and necessitated Singer pulling out of publicity chores for the star-studded sequel. We spoke with Ottman about X-Men: Days of Future Past and, in the final moments of the interview, here's what he had to say about the future of Marvel's merry mutants. Check out our full interview with John Ottman tomorrow. ComicBook.com: If the opportunity presented itself, would you work on X-Men: Apocalypse? John Ottman: Yeah -- I'm sure I will. It's mine to say no to. At this point when I leave a film like this, it's so overwhelming that I'm a little burnt-out. The notion of walking riht back into something like this is overwhelming. I'd like to smell a few roses, as they say, but I'm sure I'll start getting itchy and wanting to get back into it because it's a world that's hard to resist. ComicBook.com: This might be a question of if Bryan's involved... Ottman: Oh, yeah, he's doing it, yeah. ComicBook.com: Well, of course he's producing but we don't know for sure he's directing. Ottman: I think it's pretty well known, or announced, that he's directing it, yeah. ComicBook.com: Is the plan, then, for you to both score it and edit the movie again? Ottman: That would be Bryan's plan, yes. [Laughs] We'll see. I mean, that's always what he wants.