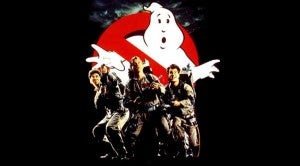 On Late Night With David Letterman earlier in the week, comedic genius Bill Murray appeared as a guest in promotion of his new film, Moonrise Kingdom. The conversation, as it often does, turned to Ghostbusters 3, and Murray confirmed that he's got contractual authority to reject any script--and has done so, something that's widely known. What's less widely known, since Murray's last rejection was said to have essentially ground the film to a halt, is that it's apparently not dead yet (or it was and it got better). Murray told the chat host that while he's always dragging his feet on putting together the third film or approving a script, he expects that they'll try it again. As for what the problem was? The actor simply told Letterman that the film would have to be funny enough to stand up to the first Ghostbusters film, something that's no easy task. The Ghostbusters logo appeared recently on promotional materials for the Las Vegas Licensing Expo, prompting some to wonder whether there would be an announcement soon regarding the future of the property. You can check out the embed below, compliments of Bleeding Cool.