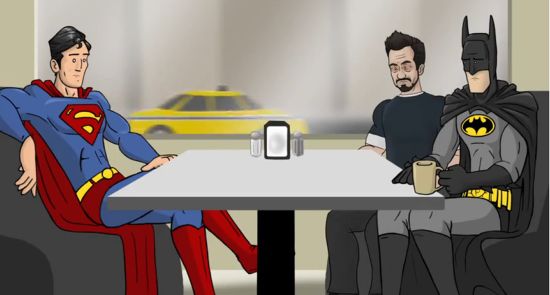 While Iron Man 3 has been burning up the box office, it has also generated quite a bit of controversy among comic book fans. If you by some chance haven't seen Iron Man 3 yet, then be warned that spoilers follow. Two of the biggest controversies around Iron Man 3 were the ruse involving The Mandarin and how Tony Stark blew up all his Iron Man suits, seemingly retiring from being Iron Man. In perhaps their best video yet, the folks at How It Should Have Ended address both of these controversial elements of Iron Man 3. Along the way, they also poke a little fun at The Incredibles, The Dark Knight Knight trilogy, and the Man Of Steel. It had never occurred to us exactly how similar Iron Man 3 was to The Incredibles, but now we totally see the connection. As Tony Stark points out, "I even have a black friend who helps me fight crime." Of course, our favorite part is when the retired Tony Stark sits down for coffee with the retired Batman and the rebooted Superman. Here's the full Iron Man 3 How It Should Have Ended video.

How Iron Man 3 Should Have Ended