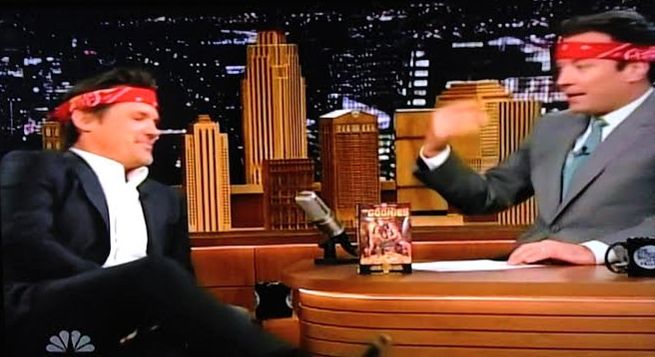 When Josh Brolin participated in a Reddit AMA earlier today, he seemed a little uncertain on if he would do a Goonies sequel. However, in an appearance on the Tonight Show with Jimmy Fallon to promote Sin City: A Dame to Kill For, Brolin confirmed that he would definitely do a Goonies sequel if asked.

In speaking about the 30th anniversary of The Goonies, Brolin said, "You do a movie like that , you don't know how it's going to turn out, and then it turns out into a cult film. And then you're sick of hearing it after twenty years, because you haven't done a film that's any good that actually matches the Goonies."

When Fallon pointed out that Richard Donner said [Steven] Spielberg had an idea for the sequel and that everyone in the first one was invited back for the second one, Brolin responded, "I would do it in a second. Of course, I would do it."

Even though Brolin would do it if the opportunity arose, he continued to express skepticism that it would actually happen.

Josh Brolin On Goonies Sequel: “I Want To Do It.”