During a conversation with Flickering Myth, production designer Patrick Tatopoulos told the site that he's transitioned from the Zack Snyder-produced 300: Rise of an Empire to the Zack Snyder-directed Man of Steel sequel, colloquially called Batman vs. Superman. And, he told the site, the ten-month release date delay has been a blessing in terms of giving them the flexibility to finish prepping for the shoot on their own terms. "The big chunk that we want to do for the movie is there but there is so much more to do," Tatopoulos said. "For me, it's been a blessing that it has been pushed a little bit." 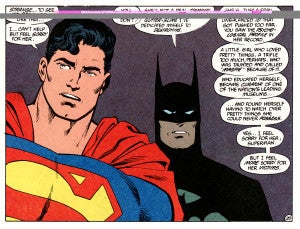 In more general terms, he said that he's delighted to be working on the film--that as a fan, he'd have loved to work on either of these characters, so working on a movie with the two of them together (plus Wonder Woman, of course) has been great. "I'm working in Detroit on Batman vs. Superman and it's super cold there," Tatopoulos said. "At the end of 300: Rise of an Empire, I met with Zack [Snyder] and he said, 'I'm going to do this movie and want you to design it.' I was stunned. I thought, 'Wow! Great.' That's where it started. This is a crazy huge movie. It's taking a lot of energy but it's something that someone like me needs to do in his lifetime. There's a project that is close to me that I was going to direct and I said, 'I need to do this.'...Working with Zack again was important to me because he's an amazing director with an incredible vision. Batman and Superman is something I've always wanted to do. I would have chosen one or both. I got the offer and jumped on it." Batman vs. Superman is set for release on May 6, 2016 and stars Henry Cavill as Superman, Ben Affleck as Batman, Gal Gadot as Wonder Woman, Jesse Eisenberg as Lex Luthor, Amy Adams as Lois Lane, Diane Lane as Martha Kent, Laurence Fishburne as Perry White and Jeremy Irons as Alfred Pennyworth.

Man of Steel Production Designer: The Filming Delay Has Been a Blessing