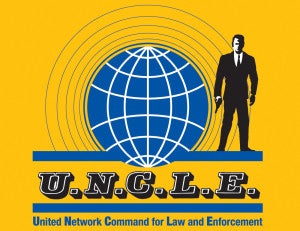 Earlier this week, news broke that Tom Cruise's commitment to Mission: Impossible 5 had pulled him away from Sherlock Holmes director Guy Ritchie's planned remake of the super-spy drama The Man From U.N.C.L.E. Given the scope of the project, and Warner Bros.'s stated desire to turn it into a tentpole franchise, fans and the trade press immediately started wondering who could step in to fill Cruise's shoes...but that conversation didn't go on for long. Earlier today, TheWrap announced that Man of Steel's Henry Cavill was in talks to star in the film opposite would-be Batman (from the aborted Justice League film a few years ago) Armie Hammer. Based on a '60s TV series, the story revolves around a fictitious secret international espionage and law-enforcement agency called U.N.C.L.E., short for United Network Command for Law and Enforcement. If he gets the role, and Man of Steel does as well as expected, Ritchie will have a truly complex schedule as he tries to navigate the Sherlock Holmes and The Man From U.N.C.L.E. movies around not just one another, but the major superhero franchises headlined by their respective stars.