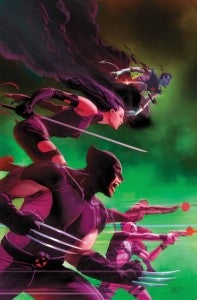 While X-Force hasn't officially been announced yet by 20th Century Fox, rumors that it will be the film that follows up X-Men: Days of Future Past received a major shot in the arm just before Comic-Con when original X-Force artist Rob Liefeld admitted publicly that they had been working on such a movie for quite some time, and that it will feature two characters he created--Cable and Deadpool--in key roles. Jeff Wadlow, writer-director of Kick-Ass 2, will reportedly write the film and may direct--something that neither he nor Mark Millar, the Kick-Ass creator in charge of overseeing Marvel's X-Men films at Fox, disputes (although they've stopped short of confirming it officially). Speaking with Screen Rant as part of the Kick-Ass 2 press junket, the filmmaker made X-Force sound a little bit like they're the harder-edged, working-class X-Men in his film. "The way I talk about X-Force is… X-Men is about mutants, and not all the mutants get into the mansion. So I'm curious to tell a story about the mutants who don't make it into the mansion." He added, when asked about the lineup, that "I'm a huge Deadpool fan, who doesn't love Wolverine – but obviously Cable is an iconic character we haven't seen onscreen yet. I love Psylocke, Domino is an amazing character – it's a long list of characters that have appeared in X-Force – Colossus is in the current lineup… There's a lot of really exciting characters that you can use in X-Force that have been in other movies, that haven't shown up, or maybe there's ways to re-imagine them, even though they might've shown up in other films."